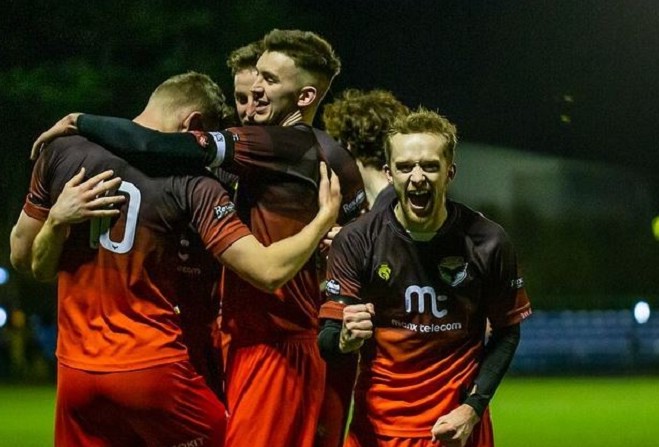 With league leaders West Didsbury & Chorlton losing earlier in the day, a win for the Ravens would send them back to the top of the NWCFL Div 1 South going into next week.

But Cheadle Heath Nomads had different ideas right from kick-off and took a deserved lead just eight minutes in.

Visiting midfielder Jordan Milne picked up the ball in the centre of the pitch before striding through the FC Isle of Man half and unleashing an unstoppable driving shot into the top right corner from 25 yards out.

It set the tone for a first period where the home side failed to create any clear opportunities on goal as they were frustrated by a solid and well-drilled Cheadle Heath Nomads defence.

The atmosphere was flat around the stadium come half-time which saw the Ravens trail 1-0 in an unconvincing first 45 minutes.

But all changed following the break as FC IOM emerged for the second half, having made one change, with a huge uplift in intensity and intent.

The Manx side were rewarded for their brighter start on 55 minutes when Luke Murray got his first goal of the evening, rising highest to nod home a Dan Simpson corner from close range to make it 1-1.

Moments after this the visitors then nearly re-took the lead when Kyle Foley powered into the left edge of the Ravens penalty area before dragging his shot just wide of Ravens ‘keeper, Matthew Quirk’s left-hand post.

But just five minutes after levelling the score line, FC IOM then went ahead for the first time in the match, when Cheadle Heath Nomads failed to play out from the back and a deflected interception fell to Dan Simpson on the left who drove into the penalty area and slammed a low strike past Demeji Willan in the CHN net into the bottom right corner.

The hosts continued to press to increase their advantage, but then a priceless chance fell to Cheadle Heath Nomads on 76 minutes when they were awarded a penalty after Murray tripped Kyle Foley in the Ravens penalty area.

Up stepped Daniel McLoughlin for the away side from the spot, but his spot kick was heroically stopped by Quirk who got down low to his left to palm the ball away, much to the delight of the home support.

With the contest still on a knife edge, with just one minute of normal time remaining, FC IOM secured the three points.

Murray got his second of the game with an almost identical close range header from a Simpson corner which thundered down low into the bottom corner to make it 3-1.

The result means FC Isle of Man go top of the NWCFL Div 1 South, one point clear of West Didsbury & Chorlton who have two games in hand.

Ravens Manager, Chris Bass, assessed how his side got back into the game:

The Ravens next game is away against Cheadle Town in the Second Round of the First Division Challenge Cup next Wednesday (9 March) at 7.45pm

Man of the Match: Matthew Quirk (FC Isle of Man)