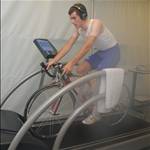 Just two days to go until the opening ceremony for the Beijing Olympics, and three days until Manx cycling star Jonny Bellis is in action.

He is in the British team for the Men's Road Race along with Steve Cummings, Roger Hammond and Ben Swift.

The 248 kilometre course in the shadow of the Great Wall of China is described as one of the toughest seen at an Olympics with an uphill finish.

He has been interviewed in an article on www.britishcycling.org.uk where he says “There is a technique to racing up the climbs which we have learnt in Italy so I feel that will help us”.

He also explained why his career is likely to be road based - "I enjoy the track but at the end of the day you’re riding your bike whether its road or track, and you are after the same thing, winning races. So I enjoy them both but coming from the Isle of Man which has no track facility, it is the road where I started and it was my results on the road that got me onto this Great Britain programme.”

Jonny also told British Cycling about how "massive" it was for the Isle of Man to have two cyclists in the British team, and stamps have been issued in recognition of Mark Cavendish and himself - “That was quite cool, I got presented with those the other week and it is good to know we have that support behind us”.