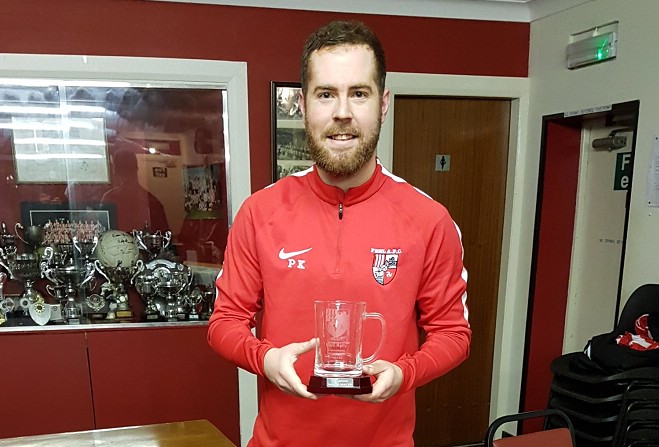 The westerners saw off Rushen 4-3 in the preliminary round of the Friends Provident competition.

An action packed afternoon at Douglas Road began within 20 seconds when Lee Gale gave the hosts a dream start.

Josh Kelly levelled against his former club in the ninth minute only for Gale to restore Peel’s lead almost immediately.

Rushen’s fighting spirit was evident yet again when Matty Cain drew the southerners level for a second time.

All the four goals were inside the opening 20 minutes.

That’s how the contest stayed until 22 minutes from time when Peel sub Billy Kennaugh restored Peel’s advantage and Gale then completed his hat-trick to book their place in the first round draw.

Kelly capitalised on a mistake in the closing stages to grab his second and give Rushen a lifeline but it wasn’t enough.

Lee Ford gave Athletic the lead against his former club before Callum Stewart levelled for the visitors.

However, Athletic took charge with goals from Connor Dowell and Steve Cowan.

Alex Crawley hit a hat-trick for the fourth successive match as Castletown triumphed in the southern derby.

They saw off Malew 4-2 in a tie switched to the Stadium.

Paddy Cooper added the other.

Dean Kinley, with a superb equaliser, and Darren Flanagan netted late on for Malew.

There was no doubting the stars of the show at Mullen-e-Cloie as St John’s saw off Division Two outfit Douglas and District 13-0.

Rhys Oates (two), Nathan Kelly and Sam Batey joined them on the scoresheet.

It was similarly one-way traffic as Corinthians put 15 past Governor’s Athletic without reply.

Corinthians led 3-0 at the break but the gulf between the top flight and Division Two was evident by the end.

Adam Johnson grabbed an extra-time winner as Gymns saw off Michael 2-1 at Tromode.

Tommy Callow had given the home side the lead before a controversial late equaliser sent the match into extra-time where Johnson won it.

The cavalry was required at Crosby as St Mary’s saw off Marown 4-1.

Holders St George’s were too strong for Onchan.

Ciaran McNulty (two), Furo Davies, Sean Quaye and Sam Caine were on target in a 5-0 success.