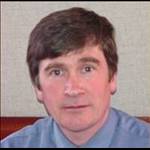 On Monday, there were several reports of walkers using closed footpaths, notices being removed and signs being ripped up.

He says any decision about the Manx Grand Prix and Manx Two Day Trials going ahead will be dependent on being able to guarantee biosecurity:-