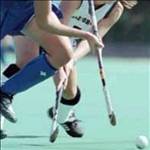 It was another free-scoring day in Manx hockey, with a total of four teams managing ten goals or more in the men's and women's premier leagues.

In the men's league, Bacchas A made the most of the opportunity to boost their 'goal difference' column, hammering 14 (fouteen) past their own B side. Karl Moore was the top scorer with five, Dave Kneale got four, and there were further contributions from Richard le Page (2), Gareth Craig, Pete Hodgson and Paul Griffiths. The win increased Bacchas' lead at the top of the table to three points, although reigning champions Valkyrs, who were a point behind them in second place, had the week off.

That gave Vikings the chance to go second on goal difference if they could beat Saracens A by ten goals or more! They actually managed to hit twelve, without reply, the scorers being Paul Kelly (3), Ash Dougal (3), Jonny Killey (2), Eddie Quinn (2), Juan Corlett and Andy Harding.

In the middle of the table, Castletown beat Vikings B 3-0, with goals from Sven Zindeque (2) and Christian Steriopulos.

In the women's premier league it was a case of 'anything you can do, we can do better!'

Reigning champions Vikings stayed top with an emphatic 10-0 victory against Castletown B, but Valkyrs remain hot on their tails, two points behind, thanks to a 13-0 win over Bacchas B. Andrea Kneen of Valkyrs took the individual honours as top scorer of the day with seven goals. Ashley Hall (3), Amy Speed, Leanne Miller and Lorna Kennaugh got the other goals in that game. For Vikings the players on target were Kim Carney (4), Katie Errock (2), Zoe Carney (2), Marie Goosen and Sarah Breen.

Castletown A beat Bacchas A 4-0 to stay fourth, a further two points behind, with goals from Kerry Kelly (2), Lauren Stewart and Sarah Blackman.

Mid-table Ramsey won 3-0 away to Valkyrs B, their scorers being Christina Kermeen, Kathryn Craine and Beckie Jones.

Ramsey increased their lead at the top of men's division one to three points, with a 6-0 victory away to Bacchas D, and Vikings B stayed two points clear of Harlequins as the top side in women's division one, after both sides had comfortable wins.