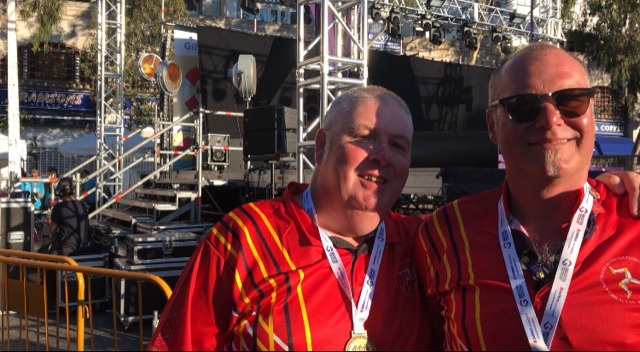 Shooters and swimmers win gold for Isle of Man in Gibraltar

There's been more success for the Isle of Man at the Island Games so far today.

Mark Riley and Alan Wade shot a combined 183 in the Automatic Ball Trap team event to top the billing.

It put them one ahead of both Guernsey and Jersey to add a fourth gold medal of the Games on the second day of competition.

A hat-trick of gold medals were also added by the swimmers, courtesy of the men's 4x50 metres medley relay, the women's 4x50 metres freestyle, while Olivia Marshall stood on top of the podium after triumphing in the 100 metres butterfly.

Laura Kinley delivered for the Isle of Man once again, claiming a silver medal after a superb performance in the 100 metres breaststroke, capping off a marvellous day in the pool.

Speaking after the medal ceremony, Mark Riley and Alan Wade told Manx Radio Sport they were delighted to help inspire the next generation: