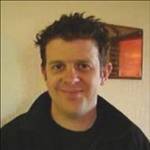 The Manx star is sitting comfortably in second place in the British Rally Championship standings, just two points behind leader Keith Cronin, after two seconds and then a win at last month's third round, the Jim Clark International Rally in Scotland.

But he told Edward Oldham there are still one or two things to iron out ahead of his home event: (interview clip attached)

You can hear the full interview on Friday Sport Preview this evening after the six o' clock news.

We go into more depth about his Jim Clark victory and talk about him going to LA for the World Stunt Awards, where he was nominated for his work in the last Bond film, Quantum of Solace.