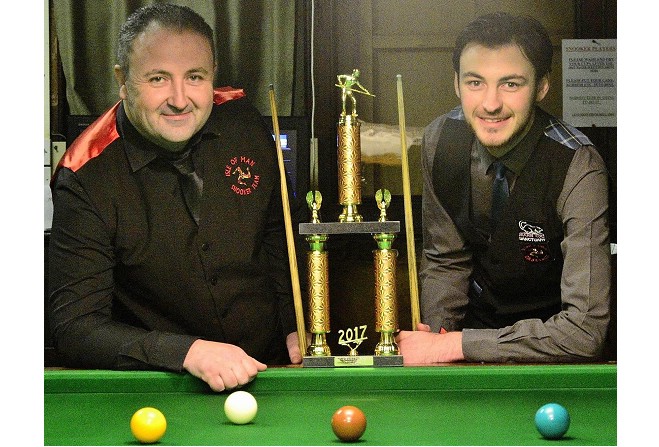 L-R Sean Corkish and Darryl Hill as opponents in the final of the 2017 Fowler and Co. IoMBSA Champion of Champions event

Manx pair to compete in Qatar

They're representing the Isle of Man at the World Team Cup - which is made up of 24 teams of two players each from across the globe, invited by the International Billiards and Snooker Federation based upon the players' various international amateur events last season.

The Isle of Man hadn't originally qualified, but after three withdrawals, officials approached Hill with an invitation during the EBSA European Championships earlier this month.

Under a 'pairs' format, Hill and Corkish will compete from Tuesday until Friday having accepted the invitation - the duo are guaranteed $1,000 in prize money, which will rise depending on their progress - the winning team wins $15,000.

They've been drawn in one of eight groups of three teams each, from which two will qualify to leave the last 16.

Corkish has played in Qatar before, having competed at the World Amateur Championships there in November 2016.

Full teams and players lists can be found at www.ibsf.info.