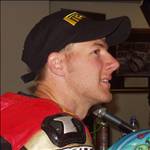 In the TT, all eyes will be on Ian Hutchinson today, as he bids to become only the second man in the 103 year history of the event to win four races in a week.

The Yorkshireman has already stood at the top of the podium for the Superbike, Supersport 1 and Superstock TTs, and today - weather permitting - he will be going all out to make it four straight victories, with success in the Monster Energy Junior Supersport 2.

The only 'quadruple' in TT history came in 1996, when Irishman Phil McCallen was the man who dominated the festival.

That achievement betters the feats of 'hat-trick' winners Mike Hailwood, Joey Dunlop (three times), David Jefferies and John McGuinness, but McCallen - who won three in 1997 as well -  says he always thought it could be done again (play audio file):

There is full commentary on the build up to today's racing and all the action on Manx Radio TT.