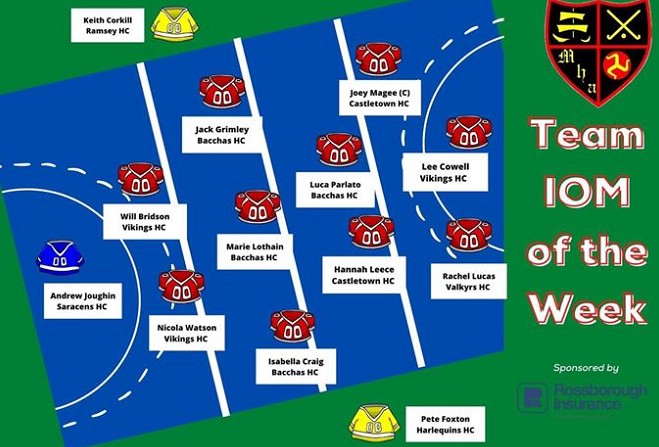 Here we are, the first ever ‘Team IOM of the Week’ and what a team it is!

On Saturday when there was 121 goals scored, we received nominations for 26 players that represent all 7 of the hockey clubs on island (with a few of you getting multiple nominations) 🏑

🟢 Keith Corkill (Ramsey HC) was a hero and stepped in last minute to cover a fellow umpire who had issues getting to the game! The fixture couldn't have gone ahead without him!

🟡 Pete Foxton (Harlequins HC) our IOMHUA chair, who puts in countless hours umpiring, coaching and developing his fellow officials! He was in total control of his fixture this weekend, umpiring fairly and consistently!

🔵 Andrew Joughin (Saracens HC) had multiple nominations for his heroic performance against the current premier champions, Bacchas A. He made some stunning saves showing his sheer determination, often making 3/4 saves in a row from some of the most dangerous forwards in the league!

⚫️ Will Brideson (Vikings HC) new into the M1s he has proved himself a crucial player with his mad distribution skills, that often lead to multiple attacks in each game. This weekend, he kept the Ramsey forwards at bay, often breaking down their 2v1s. His teammates describe him as composed on the ball, and always finding the right pass!

⚫️ Nicola Watson (Vikings HC) was fearless in her inter club derby this weekend, keeping the scoreline honest and making some exceptional goal line saves in the absence of a GK!

⚪️ Jack Grimley (Bacchas HC) is one to watch in the Men's Div 1. Officials and spectators were amazed by his wonderful game play and distribution throughout his game. Creating multiple goal scoring chances with his 1-2s!

⚪️ Marie Lothian (Bacchas HC) picked up MOTM in her L1s debut due to her cool, calm and collected nature. She has slotted in perfectly as a defensive midfielder, playing an instrumental role in both attacking and defensive play. Described by her teammates as a pleasure to play alongside!

⚪️ Isabella Craig (Bacchas HC) moved up into the L2s this season and week by week continues to impress her teammates. A stunning performance today following in her parents footsteps, and even bagged a goal!

⚪️ Luca Partlato (Bacchas HC) at only 14 years old already plays an essential role in the M2s in the prem. He was nominated multiple times for TOTM alongside his fellow U16 teammates who are described as ‘the core of the team’ by their captain!

🔴 Hannah Leece (Castletown HC) is a brilliant role model on and off the pitch, she's an active coach and umpire as well as an outstanding player. This week, she scored a beautiful solo goal taking out rows of players before finding the back of the net. Viral in the 3-2 win!

🔴 Joey Magee (Castletown HC) is the chosen Captain this week for the ‘Team IOM of the Weekend with a whopping 5 nominations for his debut performance in the senior league, it sounded like he had a stormer. His confident play led him to a goal and also an assist to his father who was also in the team! Well done Joey! 🙌🏻

⚫️ Lee Cowell (Vikings HC) is a legend in the M3s who took on a 1st team on Saturday. He didn’t stop running creating space for his team with his movements, and a well taken goal!

🔵 Rachel Lucas (Valkyrs HC) is a pleasure to play alongside, and a good sport for the opposition. Oh, and she scored 5 on Saturday- perfect forward form!