'Hurricanes' take the Wakefield by storm 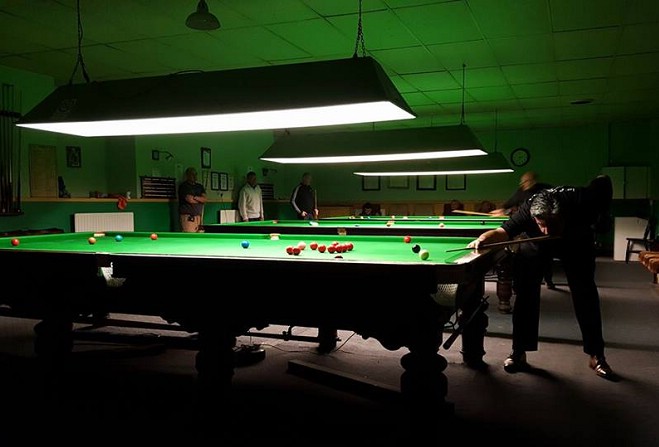 Chris Dagnall of the 'Hurricanes' at the table

The week before at Finch Hill, the 'Hurricanes' beat Finch Hill 'Musicians' in the semi finals, with the 'Old Skool' beating Ramsey rivals St Olaves 'New Skool' on the adjacent table.

The final of the Island's annual team knockout competition was held at Port St Mary Legion.

Matches in this competition are decided by cumulative scores, with all balls potted in each frame down to the final black.

Frame one was drawn to be Mike Doherty of the 'Old Skool' versus Chris Dagnall of the 'Hurricanes' - it was a very scrappy frame with Mike receiving a 21 point head start.

There was some good safety from both players but scoring opportunities were limited. Mike eventually took a close frame 65 to 59, putting 'Old Skool' six points ahead.

In frame two, Patrick Kerr played Nigel Kermode with Nigel receiving a seven point head start. This was an excellent frame from Nigel, including a break of 23, which put the 'Hurricanes' in complete command to set them up for the rest of the fixture.

The frame score ended 21 points to 86 in Nigel’s favour, meaning the 'Hurricanes' were now leading by 59 points in the cumulative scores.

Frame three was Brian Howland against Paul Smith. Like the first, this was another tight scrappy frame with Brian receiving a 28 point head start. Clear scoring opportunities were again at a premium, and whilst Paul did well to claw back the majority of the handicap deficit, Brian eventually came out on top by five points - 59 to 54. This cut the 'Hurricanes’' cumulative lead to 54.

In frame four, Peter Collister played Lee Butterworth, with Lee receiving a 28 point head start. Lee started well with some excellent single ball long pots extending his lead, but Peter hit back with a well crafted break of 30 which brought him right back into the frame.

With just the colours remaining, Lee (who is not renowned for his safety) stuck Peter in an excellent snooker on the green. Peter failed with his first attempt at escaping and a foul and a miss was called.

Lee put Peter back into play and he missed again, this time with a free ball called. Lee took the free ball and laid another snooker, which Peter escaped from. After sharing single colours Lee eventually took the frame by 58 points to 82. This meant the 'Hurricanes' now led by 78.

Following handicap adjustments, Steve went on in the final frame with a huge 113 point advantage - 78 in the cumulative scores plus 35 for John and Steve’s handicap difference.

The 'Hurricanes' could take nothing for granted. There was an early chance for John with the balls positioned nicely, however an unexpected missed black let the 'Hurricanes' off the hook.

Steve then potted some excellent balls to put one hand on the trophy.

Refusing to give up, John made a nice mid 20s break which left him 73 behind with 75 points left on the table.

The final frame score with points adjustments was 48 to 130 - giving DSC 'Hurricanes' the much sought-after title of Wakefield Cup Champions 2018.

Thanks to Chris Dagnall of the 'Hurricanes' for this report.