Hutchinson makes it a double! 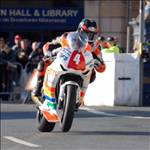 Ian Hutchinson made it two wins in one day with victory in this evening's Superstock TT.

The race was held in ideal conditions and was a tightly fought contest, with the lead frequently changing hands.

Hutchinson and Guy Martin were locked in a close encounter during the last couple of laps with less than a second between them.

Third place went to Keith Amor, with Steve Plater fourth, but there was bad news for the Kiwi Bruce Anstey who had to retire once again with a mechanical fault.

An emotional Hutchinson spoke to Chris Kinley on Sure Radio TT, after his second win of the day: