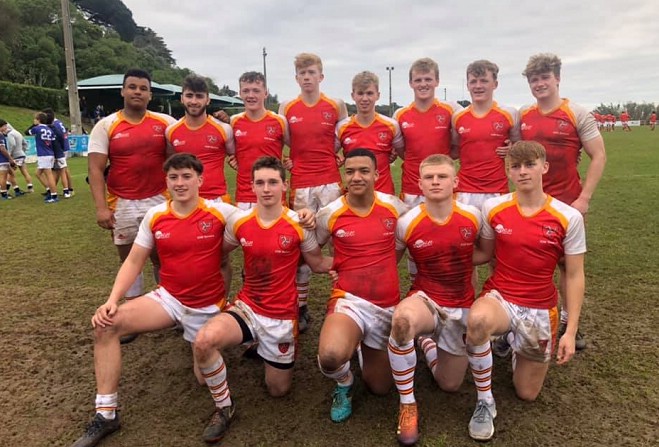 The Island U18s rugby sevens squad have come home on a high after an impressive debut on the international stage.

Accompanied by coaches George Blackwell and James Maddrell, programme director Chris Brannigan, and Developing analyst Jack Caine, thirteen players from five different, local clubs were selected to compete for the Isle of Man in the 2020 Lisbon Junior 7's International Cup last weekend, where they narrowly missed out on a place in the final.

The boys did come home with a medal though, winning bronze in a thrilling third / fourth place play-off with a last-minute try in the dying seconds of the game.

Manx players of the tournament Elliott Callow and Django Kinley spoke to Rhian Evans about what they made of their first taste of competing internationally:

The opening day saw the Manx side beat Jaguares 52-5, followed by a loss to hosts, Agronomia, 17-14, and finishing the day with another win, beating Benfica 34-5.

This secured the Island's spot in the Cup Quarter Final on day two, where they faced reigning U18 XV-a-side Portuguese Champions, Belenenses.

A tight game, which saw the Island boys coming out victorious, 5-0.

The semi-final saw the Manx side paired against eventual tournament winners, South Africa's Barbarians. Despite taking an immediate lead, thanks to an Elliott Callow screamer, IOM went down 24-7 to the big boys from South Africa.

This placed the lads in the Third Place Play Off against Agronomia, giving the Manxies a chance to avenge the defeat from the group stage.

With five seconds to play, IOM were ahead, 14-10, when Agronomia broke down the side and managed to squeeze a try in the corner, taking the lead, 14-15. With the hooter sounding for ‘Last Play’, the Manx side had time to receive the kick off, calmly taken under pressure by co-captain Luca Simmons. The ball worked wide through safe hands and Kyle Martin made the huge decision at the resulting ruck, deep into injury time, to run in a try from his own half, giving the Manxies a worthy and resounding 3rd place finish in the 16-team competition, with a 21-15 victory over the Portuguese.