Island edged by Seychelles in badminton 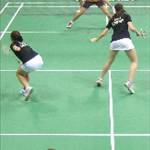 Team manager Geoff Clague, spoke for the whole Isle of Man badminton squad after they went down 3-2 in their latest match against the Seychelles.

"We are really disappointed. The team were all talking about winning today, and for a while it really looked good for us."

While the mixed doubles pairing of Matt Wilkinson and Kim Clague failed to find their best form, they still managed to score 15 points in each of their games.

Josh Green is in a rich vein of form at these games and he made it two wins from three in the men’s singles.

After promising to win a set last night, Cristen Callow was as good as her word, putting in a dominant performance to also win in straight games.

With the match score at 2 – 1 in the Island’s favour, hopes were high of gaining the one win required to take the match.

However, both the men’s doubles and then the ladies went against the Isle of Man, and the match slipped away.

Geoff said, "They were an unorthodox side, and while a number of close games didn’t go our way, there are no excuses.

"We are all gutted not to get the win – on paper it was our best chance. Realistically it was a winnable match, but on the day they played the better badminton.

"On a more positive note, I’m delighted for Cristen – she played a great set. And Josh is playing with a maturity we haven’t seen before – he’s definitely shown the qualities required to establish himself as a big game player."

Qualities which will doubtless prove essential, when, in the final match of the round-robin, the Manx team take on Australia - at 7pm on Tuesday evening, (2.30pm UK time).