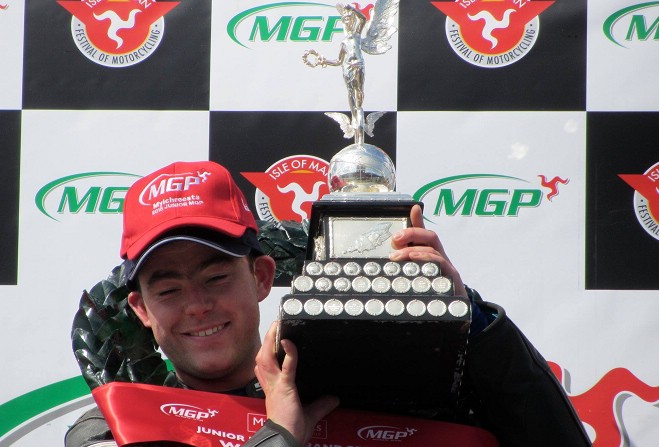 The 26-year-olds first win on the TT Mountain Course

James Chawke has won the Mylchreests MGP Junior race, his first ever win in the Manx Grand Prix.

But it wasn't at all clear Chawke would be taking the trophy at the beginning of what turned out to be a dramatic contest.

In the first lap Matt Stevenson had an early lead, with Chawke in 2nd and Dean Osbourne close behind in 3rd.

Into lap 2 and Stevenson continued to stretch ahead, 17 seconds ahead of Chawke by Ballaugh Bridge. Osbourne was then in third but dropping behind by Ramsey, with Butler snatching 3rd and Stephen Parsons in 4th.

Stevenson seemed to struggle around Ramsey Hairpin reportedly approaching far too quickly. And then in a dramatic turn of events Stevenson came off at Creg Ny Baa. However it was quickly reported that he was treated by a paramedic at the scene and was okay.

Therefore a sudden change to the top 3 emerged.

And at the end of lap 2 racers rushed in for their pit stops, standing then with Chawke in the lead, Butler in 2nd, and Parsons in 3rd.

At the start of the 3rd lap with pit stops taken into account, Chawke remained in front, with Osbourne taking 2nd now. And Tweed 10 seconds behind in 3rd.

It appeared at this stage like the race remained open for racers all vying for a spot on the podium. Indeed by Ramsey Hairpin despite a good lead by Chawke of 15 seconds with Osbourne in 2nd, Tweed was now in 3rd.

Into the 4th and final circuit and Chawke was still ahead, but at 11 seconds with Osbourne closing the gap between them. And Tweed remained in 3rd.

Chawke extended his advantage to 13 seconds ahead by Ballaugh Bridge, with Osbourne still in second place and Tweed further securing his 3rd place. But just when the top 3 began to look more stable Tweed ran out of fuel and was therefore out of the race by Ramsey Hairpin.

That sent Parsons into 3rd place, just 3.9 seconds behind Osbourne.

By the end of the the final lap James Chawke came out on top but at a much more narrow 4.4 second margin between him and 2nd placed Dean Osbourne. Stephen Parsons therefore came in at 3rd.

Chawke spoke to Manx Radio's Chris Kinley after finding out he'd won with an emotional response, saying "it just means the world to me" and "what more could a man ask for".