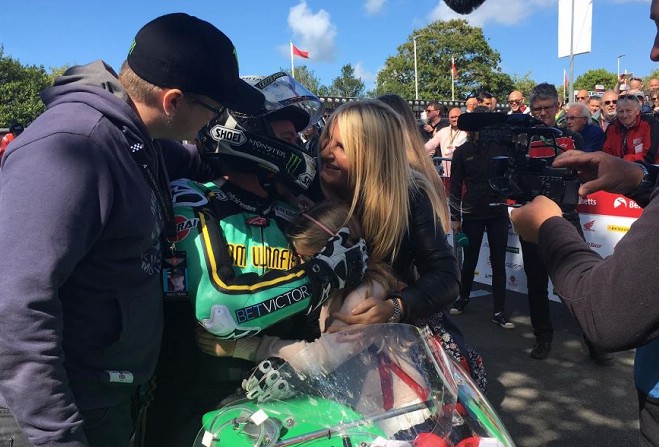 The first race of the Isle of Man's Festival of Motorcycling saw an emotional John McGuinness take first place - his second ever Classic TT win.

McGuinness secured an early 38 second lead ahead of Jamie Coward by the end of lap 1, with Maria Costello confidently in third.

Coward also firmly sat in second place for most of the race, only superceded briefly by Lee Johnston in lap 2.

Johnston however secured his place on the podium - despite a steady threat from Chris Swallow who finished in fourth.

By lap 2 it looked like Maria Costello was headed for third place, however what appeared to be gearbox trouble at the grandstand, meant she lost significant time entering lap 3 and dropped to fifth place.

By the end of lap 3 Costello came in for a pit stop. Shaking heads whilst refuelling pre-empted her retirement from the race. As she climbed off her bike though, a rapturous applause filled the grandstand.

And despite a number of changes to the look of the podium throughout, one spot was never in doubt, that of returning John McGuinness. Winning the Senior Classic TT 1 minute and 13 seconds faster than Jamie Coward in second.

His first race and win since his serious leg injury in the North West 200 last year, McGuinness has certainly proved he's firmly on form.

Speaking to Manx Radio's Chris Kinley after entering the winner's enclosure, he emotionally talked about his injury last year and how grateful he is for his family's support.