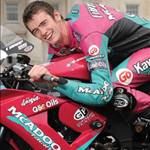 Manx racer Conor Cummins and the McAdoo team will have full Kawasaki backing for the new season.

Kawasaki has pulled out of MotoGP and the World Endurance Championship.