Kneen pick of the Manxies at British Superbikes closer 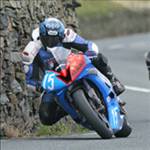 The final round of the British Superbike Championship at Oulton Park yesterday saw plenty of Manx competitors in action.

Dan Kneen claimed an excellent second in the National 600cc Superstock race, which means he finishes in fourth in the overall standings.

Conor Cummins and Gavin Hunt were in action in the National 1000cc Superstock.

The Ramsey Rocket managed 13th while Hunt was 19th, leaving them 10th and 17th respectively in the standings.

And in the British Supersport Championship and Supersport Cup Mark Cringle was 23rd and fourth respectively, giving him sixth place overall in the cup.