Last place overall for Cav Down Under 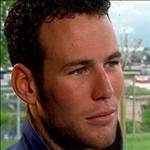 There was an element of role reversal on the final stage of the Tour Down Under today as HTC-Highroad put all their efforts into trying to get an overall victory for Matt Goss.

That meant Mark Cavendish had the unusual task of acting as a lead-out man for the Tasmanian as they went for the intermediate time bonuses and stage win needed to overhaul Cameron Meyer.

They were successful with the first bonus, but messed up the second, meaning Goss had to take first or second to win the tour.

That wasn't to be, as Team Sky's Ben Swift - who now calls the Isle of Man his home - and Greg Henderson secured a one-two, leaving Goss third.

He finished just two seconds behind Meyer in the overall standings, but had the consolation of claiming the points jersey.

Cav finished 120th, almost two-and-a-half minutes behind the leaders and was dead last in the overall classification, 33m 51s behind Meyer.

The end of the tour also marked the end of cycling legend Lance Armstrong's international career.

He's due to retire from the sport altogether after the Tour of California in May.