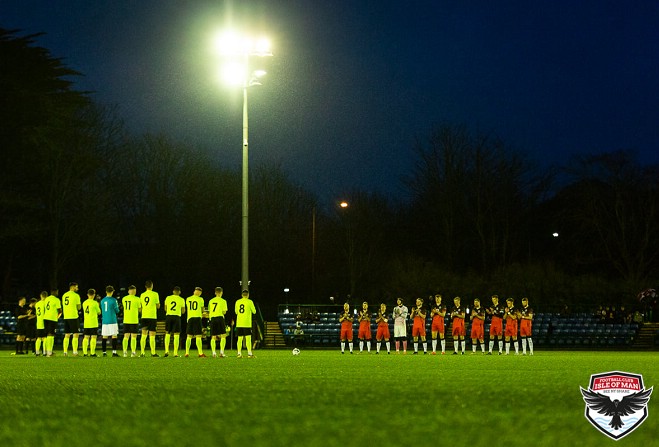 The two sides met at The Bowl with the Ravens and the visitors sitting second and third in the NWCFL Div 1 South standings respectively.

Chances were at a premium in the first half as two top-quality teams cautiously felt their way into the game.

The best opportunities of the first period fell the way of the visiting Abbey Hey.

Their top scorer, Jordan Lazenbury, blazed over the bar from six yards 19 minutes in before Dylan Fitzgerald’s shot on 33 minutes just inside the penalty area was deflected over the crossbar by Ravens defender, Ryan Burns.

After a goalless and cagey first 45, drama unfolded four minutes into the second half.

FC IoM’s Luke Murray was brought down just inside the Abbey Hey penalty area and, after a couple of minutes of deliberation, referee Darren Whitfield pointed to the spot with Abbey Hey strongly claiming the foul had been committed outside the box.

This seemed to be the catalyst for the visitors to up their intensity and desire, and tempers between the two sides flared moments later when Burns went down under a heavy challenge in midfield, sparking pushing and shoving between the two sets of players.

Once all had calmed, referee Whitfield showed three Abbey Hey players a yellow card with just the one caution going the way of FC Isle of Man.

Into the last 30 minutes, and Abbey Hey relentlessly pushed for an equaliser, forcing FC IOM back into some shaky defending.

Arguably the best chance for the Island team in the last half hour came on 67 minutes when a Burns cross from the left into the Abbey Hey area was spilled by Lawton into the path of Alex Maitland who could only smash his close range effort into the onrushing Lawton.

Whilst Abbey Hey continued to knock on the door, the Manx side held firm thanks to some heroics including a string of superb saves from Matthew Quirk in the Ravens net followed by a last-ditch goal line block from Maitland with five minutes remaining as the visitors continued to dominate the play.

But, in the dying seconds of second-half stoppage time, Abbey Hey finally got a fully-deserved equaliser in tremendous style in the 94th minute.

Lazenbury, who’d spurned a number of good chances during the game, stepped up for a free kick 25 yards out and lashed an exquisite curling free-kick into Quirk’s top left corner to make it 1-1.

The Ravens next game will be on Wednesday 16 March away at AFC Liverpool in the first round of the Macron Cup, kicking-off at 7.45pm

Man of the Match: Matthew Quirk (FC Isle of Man)