Malew 2 extend the gap at the top 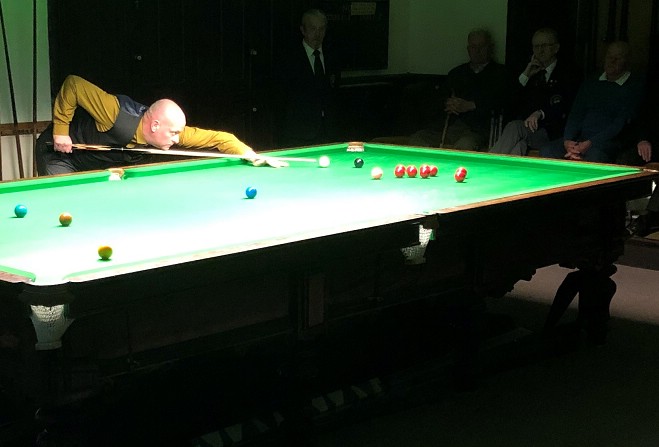 John Kennish at the 2018 Fowler & Co Champion of Champions

John Kennish stars with break of 56

There’s now daylight between Malew 2 and the chasing pack, after the first round of fixtures of the year in the 2018/19 Macs Builders Merchants snooker league.

The Ballasalla outfit recorded an important 3-2 home win over Douglas Snooker Club ‘Hurricanes’ to extend their lead at the top of the table to four points.

The visitors went 2-0 up through Nigel Kermode and Paul Smith, but Paul Bridson, David Quayle and Mark Quinn fought back to complete a remarkable comeback and keep the league leaders’ impressive run going – which now stands at seven wins from nine matches.

In contrast, Douglas Snooker Club ‘Wannabes’ are glued to the bottom of the table after losing 4-1 at home to the Finch Hill ‘Young Guns’.

Fred Corris provided the consolation for the home side, sandwiched by wins for Darryl Hill (who had a break of 24), Nicola Young, Chris Nash and Dollin Mercer.

Mercer amassed 113 points in his victory against Paul McKinstry, including breaks of 40 and 25.

That 40 would not be the highest break of the week though, as John Kennish continued his high-scoring form to produce a 56 for the Finch Hill ‘Musicians’, which followed a stylish 83 in warm-up!

His team also ran out 4-1 winners, at home to Peel Legion, with the other victories coming from Peter Glover, James Hynes and Matthew Dodd.

Geoff Hall won Peel’s only frame of the night, who are experiencing something of a fall from grace after being clear league leaders at the start of the season.

That result leaves Peel and the ‘Musicians’ in joint-second place, along with St Olaves and the Finch Hill ‘Mob’ on 30 points.

Steve Oates was the only victor for the ‘Mob’, and there was also a break of 22 for Peter Crellin as he tried to catch Kerr.

Douglas Snooker Club ‘Newbys’ won 3-2 away at the Finch Hill ‘Rockets’, thanks in part to wins for Zain Abideen and Ste MacDonald who had breaks of 24 and 20.

Lee Grange was the other winner for the guests, with John Spellman and ‘Rocket’ Ron Grogan blasting off for the ‘Rockets’.

Dave Pickersgill beat Isle of Man Billiards and Snooker Association President Roy Gelling by three points after a break of 22 in the opening frame, which was followed by wins for Phil Joynes, Shaun Roberts and Marc Morley.

Sean Corkish stays top of the break league on 20.5 points, followed by Peter Kirkham and Tom Miller on 18 and 17.5.

Jamie Wilson and John Kennish make up the top five on 15.5 and 14.5 points after eleven matches.