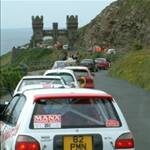 A clear sign of the increasing profile of ‘club’ level closed roads rallying, this weekend’s PokerStars Rally is bigger and better than anything that has gone before in its 15-year history.

The Manx Auto Sport-promoted event is a round of three different championships, and has a route that wouldn’t look out of place on the Manx National Rally.

Even then there is room for innovation amongst the testing 110-stage miles; two of the twelve tests take place from midnight into the early hours.

In the absence of defending winner Dave Pattison, who’s car is still not repaired after his Manx National shunt, Eurocars Motorsport Manx Rally Championship leader Nigel Cannell is set to lead the 48 strong field away from the TT Grandstand start in his now familiar Mitsubishi Evo IX.

And it’d be a brave man that’d bet against him returning there to the rally finish on Saturday afternoon in the same position too.

Cannell is on the crest of a wave after his second overall place on May’s Manx Telecom Rally was followed up by victory on last month’s Riverside Furniture Jurby Stages.

Daughter Imogen will co-drive, as she did on February’s similar Chris Kelly Memorial event, when they were runners-up.

The main opposition will come from Andrew Leece and Graham Fargher in their Evo VI version Mitsubishi, with which they finished right behind Cannell on the podium in May.

Andrew opted to miss Jurby, and will have to be on top of his game to keep the pressure on ‘Fasty’ in the hopes of grabbing a win.

Of the other four-wheel drive entries, Tim Collins and Paul McCann (Evo IX) show plenty of glimpses of pace for a stage or two, and need to put it together rally-long to earn a top result that starts to feel overdue.

Sean Kelly has switched back to the Japanese marque too after a solitary run in Rob Watson’s Nova kit car, moving up to an Evo 7.

If he can get to grips with it quickly, his pace earlier in the year makes him one to watch.

Similarly Robert Ellison has a 7 at his disposal and set noteworthy times early on at Jurby before mechanical retirement.

Leading visitor is Tugs Sherrington (Evo IV), back for more after a top ten finish on his debut on the Island in February.

In the two-wheel drive classes Stuart Egglestone will be the man to watch out for after submitting a late entry in his Vauxhall Astra.

He was fifth on the Chris Kelly event, right behind reigning Manx champion Connor Corkill (Ford Escort), and the pair will resume battle once again.

Joining them are John Kirkpatrick and Marty Quine in the rear-wheel powered Astra, Kex Walker and Danni Matthews (BMW), Matryn Jones who is back to his giant-killing acts in the Nova, and Andrew Holmes in his Astra, with co-driver Stephen Fox currently leading the pace-note callers championship chase.

It should be a close battle amongst them all, with Adrian Kermode also thereabouts in the Porcshe.

The challenge is the route, as well as the competition of course.

The event starts at 6.30pm tomorrow for a long opening leg that has road closures ending at 3.30am Saturday if necessary.

Then there’s a halt before the double run of the 12.6-mile Mountain Stage (midnight and 1:15am approx), covering classics Tholt-e-Will, Brandywell and Druidale, linked by a section of the TT course across the Mountain Road.

First cars are due at the finish a the Grandstand (also the service area throughout) at 2.15pm.