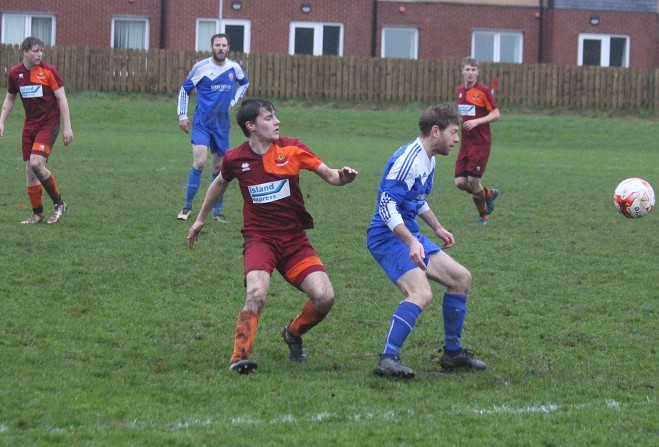 Pulrose missed the chance to move back to the top of JCK Division Two on Saturday.

A double from Stuart Morris consigned them to a 2-1 home defeat to Marown to dent the hosts’ promotion hopes.

Morris fired home the opener just after the half-hour mark

Marc Priestnal levelled six minutes after the restart but Morris had the final say three minutes from time to seal the points for the Crosby club.

He was sent-off shortly afterwards for a second yellow card but Morris was still the match-winner.

Two goals in as many minutes midway through the second half wasn’t quite enough to help Malew see off Onchan in a match played at Colby.

An early Dean Kinley penalty gave the southerners the lead but Connor Prescott equalised fairly quickly for the visitors.

A close contest in difficult conditions remained in the balance until Dan McLaughlin restored Malew’s advantage and Kinley then kept his composure to net his second spot kick of the afternoon.

The drama still wasn’t over as Paul Morris headed home a second for Onchan and then, with the visitors believing Kraig Marsh had equalised, referee Gerry Thomson ruled the ball had not crossed the line.

Marsh was later dismissed, as was Onchan manager David Rees.

However, they were not to be denied as Mark Rees grabbed a last-gasp equaliser deep in stoppage time, to earn Onchan a 3-3 draw.

Johnny Lund (four) and Aidan Cummins (three) were the stars of the show.

Declan Cummins, Harry Weatherill and Chris Robinson netted the others in 10-3 success.

Ayre United ran out 4-2 home winners over a spirited Governor’s Athletic at Andreas.