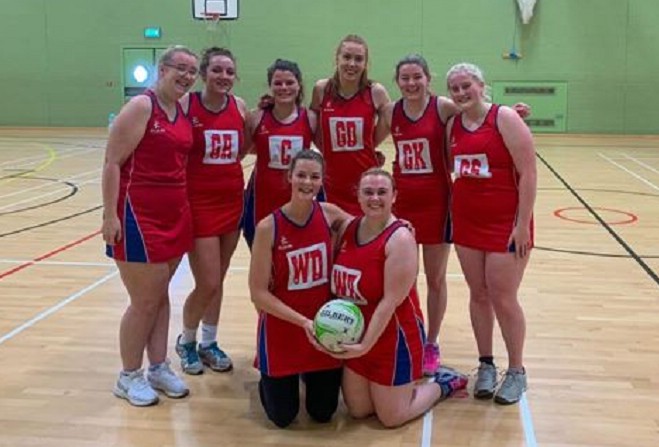 Simcocks took to the court with one thing in mind...a win. From the first whistle the girls put pressure on the Balla girls, with Rachel Johnstone working tirelessly in mid court for the reds, picking up interceptions and tips.  Aalish Bridson played up for the Reds today and was taking shots from anywhere in the circle. Ballasalla's GD, Ella Carridge worked really hard against Simcocks GA, Chloe Gale but could not stop the goals, as the girls didn't seem to miss a shot and the first quarter ended 15-3 to Simcocks.

The second quarter saw a change within the Simcocks team and Hannah Leece came onto the court taking the WD position. She worked hard and hindered the attacking movements of the Balla girls, although Jane Ryder worked just as hard for her team linking really well with her WA Natalie Wilson-Spratt.

The feeds Jane did into her shooters were on point and fed well and when Annabel Kneale got the ball, she finished the lovely play off by scoring the goals. Balla certainly came back stronger in the second half preventing the shooters from getting as many goals the second quarter finished 25-8 to Simcocks.

The third quarter was a little scatty for the Simcocks girls, who took their time to settle. Balla worked hard and were able to close the gap a little, making solid decisions on the court. Third quarter ended 35-22.

The 4th quarter saw the Simcocks girls settle and get into a good flow, with some lovely play between Natalie Swales and Rachel Johnstone, feeding the circle well. Although pressure from Ella Carriage made the attacking girls think, Simcocks were in their stride and with Becky Hempsall denying goals down the other end of the court, it was a great win for the Red’s.

A well-deserved player of the match went to Rachel Johnstone.

Marbree Missfits came out strong and settled themselves into the game straight away with the first goal. Simcocks made some great interceptions in the circle, however, by their GD, Alice Hodgson-Cummins, which meant they were able to bring the ball back down court and capitalise on this, which lead them to finishing the first quarter 6-3 ahead.

The second quarter saw tight marking coming from Marbree’s GD, Anna McChesney and their GK, Amy Kneale, which saw them take the quarter and take them 1 goal ahead at the end of the first half.

The third quarter saw Marbree come out fighting and with some great play throughout court, they stretched their lead even further, by the end of the third quarter.

Simcocks knew what they had to do in the fourth quarter and with some great shooting by their GS, Evie Sansbury, saw the final minutes as a nail biter as Simcocks had pulled themselves back to just a goal behind.

It was then, that with a great intercept by Simcocks WA, Angela Aumonier, Simcocks finished with a goal which meant the game finished 22-22 and with POTM going to WA, Angela Aumnonier.

This was a battle of the bottom teams in division 2 this week, with Whites challenging for their first win of the season. It was a close contest in the first quarter, with all centre court players making their mark in the game, with Whites ahead 6-3.

Going into the 2nd quarter, Simcocks really found their flow and with some great defensive work from Victoria Waterhouse (GK) and Izzy Bridle, they put pressure on the Route 1’s attacking team of Sarah Morgan (GS) and Emily Christian (GA) allowing for some great turnovers for Whites to get the ball down the court and execute their shots. Making the score 15-5 at half time.

The Third quarter saw the Whites dynamic duo of Jodie Swales (GA) and Ellie Barker (GS) really take charge in White’s circle racking up another 8 goals, with some great passes in from Alice Leadbeater-Terris. Route 1 still battled through with some great play from Flo Barber (C) and Millie Jo Purves (GD).

The final quarter saw more dominance from Whites especially Chloe Wood (WD) with some cracking interceptions which lead to a further 10 goals being score., Route 1 soldiered through but with the goal difference too big it was a struggle to get through.

The final score was 33-7. Whites have been waiting and chasing for a win and it was thoroughly deserved.