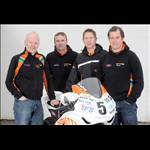 Padgetts Racing has confirmed it's line-up for T.T. 2012.

Eight-time T.T. winner Bruce Anstey has resigned for the Yorkshire based team and will ride in all classes - Superbike, Supersport, Superstock and Senior - on honda machinery.

The popular New Zealander won for the outfit last year when he crossed the line first in the Supersport Race One.

Seventeen-time T.T. winner John McGuinness will compete in the Superbike and Senior Races for the Honda Isle of Man T.T. Legends but for Padgetts in the Supersport and Superstock events.

And Gary Johnson is added to last year's squad and will race in the Superbike and Senior Races - he took his maiden victory around the Mountain Course last year in the second Supersport race.

Padgetts have enjoyed great success at the T.T. over the past four years with a total of nine wins - including Ian Hutchinson's record breaking five in a week in 2010.