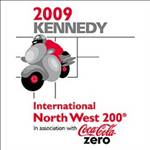 Castletown's Chris Palmer notched up two second places in a rain affected North West 200, which saw the last two races abandoned by the organisers, because of the deteriorating conditions.

Conor Cumins from Ramsey rode consistently to three good placings, and there were fine North West debut rides in the Superstock from Daniel Kneen and Gavin Hunt.

The outstanding performers at the meeting were William Dunlop and Steve Plater, with two wins each, and Alastair Seeley who took the chequored flag in the Superstock, which turned out to be the last race of the day.

There were concerns beforehand that the rain would have a big say in proceedings, and that turned out to be the case, with a number of races reduced in length.

The red flags came out for incidents early on and appeared regularly because of the conditions, as the weather got worse.

William Dunlop was just over six seconds ahead of Chris Palmer, and declared the winner, when the opening race, the Greenline 250cc, was stopped after the leaders had completed three laps.

It was another spirited effort but it means that, despite his successes elsewhere, he still hasn't achieved his ambition of winning a race on the North West 200 circuit.