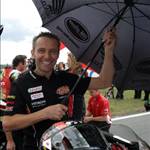 Injured two-time T.T. winner Steve Plater is aiming to return to racing at the British Superbike Championship meeting at Cadwell Park at the end of August.

Plater missed out on defending his Senior T.T. crown after a serious crash in practice for the North West 200 in May.

He suffered a double fracture in his left arm and was then discovered to have a break in his neck.

Several operations later and following treatment in a hyperbaric chamber, Plater is back in fitness training.

He's hoping to be given the go-ahead from medics to get back on his bike in early August so he can some time at track days ahead of Cadwell Park.