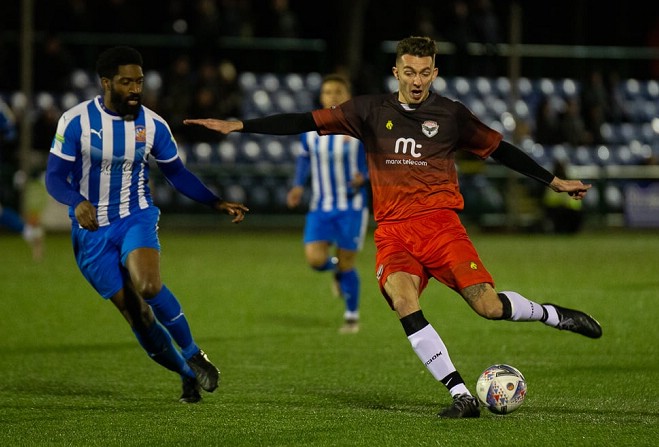 FC Isle of Man continued their perfect start to 2022 with a 2-0 victory over Wythenshawe Amateurs at The Bowl last night (8 January).

The first 18 minutes of the first half saw both sides lacking in clear cut chances as both strategically worked to try and undo each other’s disciplined defending.

The Ravens made the crucial first breakthrough though in the 19th minute when Jack McVey from a corner placed a low pass back into the six yard area, and Chris Cannell was there to swivel and smash a half-volley into Wythenshawe goalkeeper, Kyle Haslam’s, bottom right corner.

The visitors' job to then get back into the game got even harder just five minutes later when their captain, Christopher Howard, was sent off after receiving a second yellow card for a challenge on Cannell on the left flank.

Wythenshawe stopper Haslam stopped the Island side doubling their lead on 33 minutes saving with his legs to deny a low strike from the right from Lee Gale.

After going in 1-0 ahead at half time, it was the turn of the home side to face pressure early in the second half.

The opening exchanges of the second period saw 10-man Wythenshawe Amateurs press well to push for an equaliser, but ultimately they were unable to truly test FC IOM keeper, Matthew Quirk.

In the 56th minute, Ravens striker Sean Doyle came close to grabbing a second for the Manx side but his curling left foot effort from the edge of the area was emphatically tipped round the right post by Haslam.

Wythenshawe battled valiantly throughout the second period to keep FC IOM at bay as the pressure rose, but with five minutes remaining the Island hosts sealed the three points.

Dan Simpson on the left edge of the Wythenshawe area cut back for substitute Luke Murray who fired a low drive across Haslam into the bottom corner to make it 2-0.

The win sees FC IOM climb above Wythenshawe Amateurs to fourth in the league table.

Man of the Match was FC Isle of Man's Chris Cannell: