Record-breaker Rawlinson Out of Luck 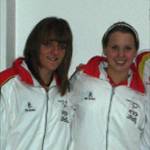 Manx swimmer Olivia Rawlinson has missed out on qualifying for the 200m Freestyle Final at the Commonwealth Youth Games in India by just one place, despite recording her fastest ever time.

The 15 year old from Ramsey finished third in her heat in Pune which ranked her ninth overall - the top eight went through to the Final.

Olivia's time of 2 minutes 7.42 seconds was a whole second inside her own Manx Senior and Junior Long Course records for the distance.

14 year old Heather Millar finished fifth in the same heat as Olivia - the 11th fastest time of the 29 competitors in the event.

The swimmers ahead of the two Manx girls were from Australia, England, Scotland and Wales. Behind them were nations such as South Africa, Bahamas, Malaysia and India.