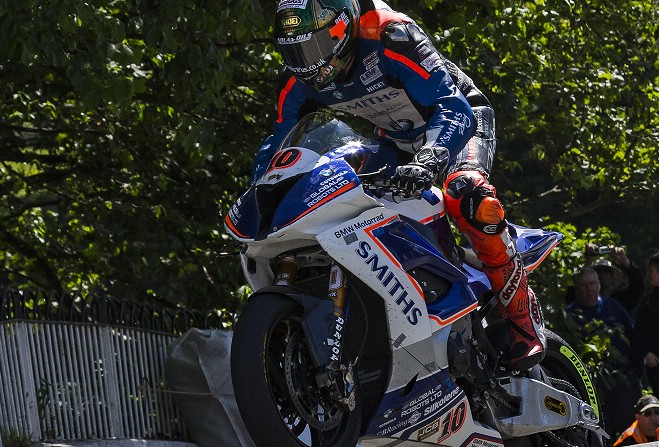 The fastest road racer in the world says necessity will dictate if new records are set at the forthcoming TT.

Peter Hickman wrote his name into the history books after a phenomenal final lap in last year's Senior race, as he set a new outright lap record of 135.452mph on his way to victory.

The 32-year-old was pushed all the way by Dean Harrison on that gloriously sunny June afternoon, something he believes paved the way for his stunning ride.

Speaking to Manx Radio Sport, Hickman opened up about how he plans to top his incredible performances in 2018.

Despite claiming his first wins on the Isle of Man last year, he doesn't feel there's added pressure to replicate that success.

"I always said - before I won a race - that the pressure was on other people that have won. Because if you have won and then you don't win [again], you've gone backwards," Hickman said.

The weight of expectation from the hordes of bike fans and motorsport pundits who make their way to the TT is not something the Burton-upon-Trent man is paying too much attention to either.

"I'm here for myself, I'm here to have fun; pull some wheelies and do some skids and enjoy myself, and that's exactly what I'll be doing."

Hickman may not feel the added expectation, but it is something he's fully aware of.

"Myself, Dean [Harrison] and Michael [Dunlop] are probably the favourites for winning, but to be honest there are at least ten riders that could actually win races at any given moment if everything goes their way."

Hickman maintains last year's battle with Harrison was pivotal in driving up standards.

With the wealth of talent in the paddock well-documented, he knows he can't afford to let up.

And it's healthy competition that the two-time TT winner cites as one of two key factors - along with the weather conditions - in shaping whether or not we see even faster laps in 2019.

"Unless that needs to happen, it won't."

Hickman will be riding for Smiths Racing BMW, the Trooper Triumph in the Supersport class and the Norton Superlight in the Lightweight races when he heads to Island next month; and few would bet against him adding to his tally of wins.