Rugby: Douglas to take on Carlisle in front of home crowd 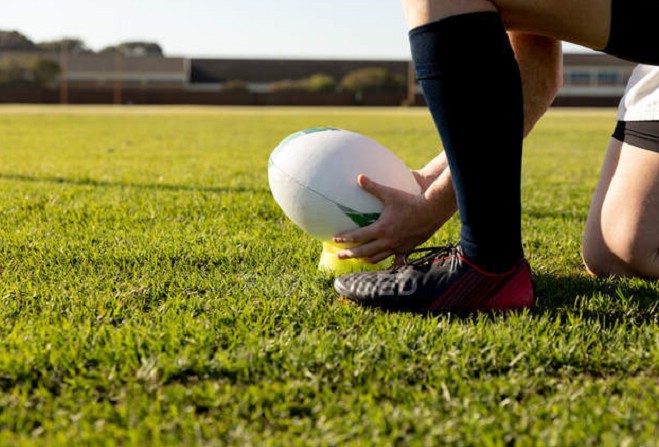 Due to early season travel troubles this will be Douglas’ first home outing of the season in North One West. On the road they’ve lost four from four and currently sit at the foot of the table. A few home games may be just what’s needed to get the wheels back on the wagon. Carlisle are just two places above Douglas and have won just one from six and could be the side for Douglas to break their duck against. Simon Hoddinott back on the teamsheet will be a boost for Douglas as no matter how many tries the Martin brothers score out wide, without some beef in the front five, they won’t see the ball. This could be Douglas’ day.

Matthew Meechan’s Ramsey side are two from two and top the table, albeit at an early stage in the competition. Dan Richmond and Brandon Atchison have ninety points between them after just two games and Ramsey are clearly playing well. Douglas brushed aside Vagabonds 31-5 in their only outing, but have experienced a manpower shortage which led to the postponement of their other scheduled match. At full strength the Celts will be a match for Ramsey but if there’s a sniff of weakness this Ramsey side will find it and punish it.

At the Ballakilley Field of Dreams, Southern Nomads host Vagabonds in the other Manx Trophy game. An understrength Nomads were beaten comprehensively at Ramsey two weeks ago and Nomads will be hoping to be closer to full strength this week. Vagas too were beaten by Ramsey but they do have some promise. Nathan Gibson looked very sharp in the Ramsey game and had a busy afternoon against Douglas too which makes him the man to watch on Saturday.

In the Ravenscroft Manx Bowl game Vagabonds Hornets host Castletown. The Hornets were ran very close last Saturday with a three point margin against Western Vikings. Danny Kane looked very sharp in the backfield and had a hand in two of Vagas tries. Town were missing a few last week and conceded against Ramsey B. If skipper Kunal Patel and the others are back, they may just pick up some points with Vagabonds being stretched for squad depth.

Barring the end of the rugby season’s summer break, matches haven't been much more anticipated than the visit of Carlisle on Saturday. (23 Oct) After four consecutive away matches to open the 2021-22 season, and the last league visitors being Vale of Lune back in February 2020, Douglas players and supporters will treasure the opportunity to bring Port-e-Chee to vibrant life again. The enforced diet of functions and local opposition, all much appreciated hors d'oeuvres but missing the ‘plat principal’ of league rugby, has undoubtedly left a void.

Our visitors recall their last visit here in 2018, en-route to winning North One West and achieving promotion to North Premier. They only lost on four out of twenty-six occasions that season, and one was at Port-e-Chee at the third round of matches in September where diminutive Carlisle prop Alex Neil dominated the scrum all afternoon but ended up on the wrong end of a 28-24 scoreline.

It was a long 2019-20 season for the Cumbrians as they strived to bridge the gap between North One West and the North Premier league, but in 12th place they just fell through the cracks to North One West as Covid and league structure alterations took effect.  Their start to this campaign has seen one win at home against Altrincham Kersal and two bonus-point defeats against Wilmslow at home and Birkenhead Park away.

If there was a half-time declaration facility in rugby, Douglas would be well placed in the league to date having lead two of four matches at the completion of the first 40 minutes – Glossop 17-12, Vale of Lune 13-12, and at Manchester they were just pipped to a 15-14 lead. The obvious suggestion would be a fitness problem, but more validly is that the travel inevitably takes something out of the player. Plus the fact that the turnover in player personnel through injury and unavailability via work, family or calendar conflicts are a fact of our lives. That Douglas on a regular basis defy logic by producing outstanding results in the face of so many hurdles sometimes beggars belief.

The new faces coming through to the Douglas 1st XV may be familiar to some if you’ve watched Douglas progress in the last few years. Brothers Kyle and Craig Martin have abundant pace, Wilf Kermode is to the manor born at openside flanker, and brothers Seth and Shay Waterworth are definitely not teacher’s pets. Dave Sherwin, Nathan Hinks, Owen Carvin, Charlie Henthorn, Harry Hewson, Brendan Kelly, Jack Shimmin and John Dutnall are just a few examples of the youngsters to have risen through the ranks and earn their spurs, and we’re fortunate to watch the fruits of their labours. Tucked briefly under the wings of your Bryn Snellgrove, Niall Killey, Ralph Clarke, Robert Todd and Conor McCaughan crew amongst others, the nursery appears to be flourishing.

A mighty first period from Douglas and five-point leading margin at half-time ultimately proved not enough to upset considerable odds against fourth–placed Glossop.

The Derbyshire side had only lost one in six to unbeaten league-leaders Stockport, and when Douglas had two players declare unavailability late in the week, the odds stretched that wee bit further. Underdogs do revel in adversity though, and prop Simon Hoddinott took just five minutes to put his influential stamp on matters with a try, converted by Luke Hyland in an unfamiliar scrum-half role. Hyland’s 14th minute penalty goal for 0-10 put the cat amongst the Glossop pigeons, and back-row John Asquith saved a few blushes when the Glossop eight mauled over from a 30th minute line-out. Douglas winger Kyle Martin then found some 40 metres of open prairie to dismiss the cover and dot down near the posts on the half hour.

Hyland converted for 5-17 and an efficient Douglas defence smothered Glossop’s intent without much drama for the next 10 minutes. Douglas were heading for the break with purpose, until bang on the 40 minute mark Glossop skipper Josh Edwards ploughed through and the experienced Zac Round added the extra’s for 12-17.

Glossop were even quicker off the mark for the second-half when back-rower Sam Gibson made a third-minute interception off the back of a line-out, and Round’s conversion put the hosts noses in front 19-17. Shay Waterworth’s injury brought Nick Hughes off the bench, and Glossop went further ahead when centre Gregg Moran finished off Tom Benbow’s scrum-half break from the base of a solid Glossop scrum.

The next 10 minutes effectively decided the match. Seth Waterworth’s legal clattering of his opposite number went un-rewarded after Glossop punches were thrown in response, and tries from Ryan Harding and Tom Dearlaney put Glossop in the driving seat at 31-17. Nathan Hinks replaced Owen Carvin and Dave Sherwin stepped in to Robert Todd’s large and effective front-row boots as Douglas shifted the sands.

Last quarter Glossop tries from Adam Mallinson and a second for Benbow were completely with the run of play, although Douglas full-back Charlie Henthorn blazed a 80th minute try-scoring trail that again brought Douglas frustratingly short of a bonus point.