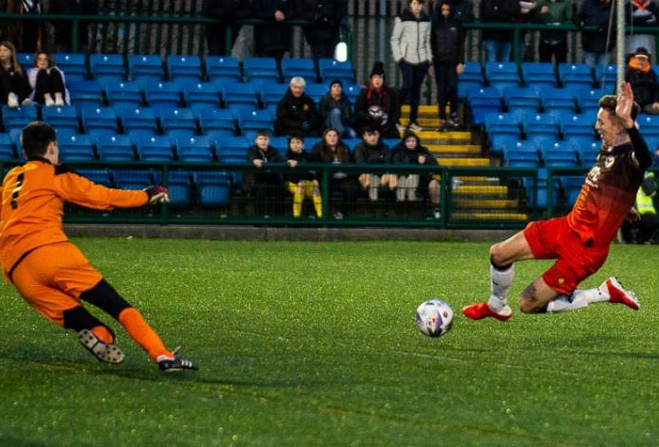 A ruthless FC Isle of Man continued their charge for promotion with a 9-0 hammering of St Martins at The Bowl on Saturday night (19 March).

With all their fellow NWCFL Div 1 South play-off contenders all winning at the weekend, the Ravens knew three points were crucial this weekend.

Meanwhile, the visitors St Martins came into the clash after an immensely tough season to date on and off the field, already confirmed to be relegated with just two points all campaign.

The hosts opened the scoring just eight minutes in when Sean Doyle got his first goal of the night, tapping home from six yards from a low Dan Simpson cross from the left.

It set the tone for a first half which saw FC IOM dominate almost all possession with much of the first period played in the St Martins half.

But the visitors held firm against further punishment until an unfortunate moment on 40 minutes when a free kick was swung in from the left by Ravens man, Jack McVey and amid a sea of players, the ball bounced off the head of St Martins defender, Ezequiel Incaque, and into the St Martins net for 2-0.

The Ravens then increased their lead on the stroke of half time when a flowing counter-attack from right to left ended with FC IoM’s Luke Murray squaring for Simpson with acres of room on the left of the area to smash a low strike into St Martins ‘keeper, Troy Taylor’s bottom left corner.

3-0 up after 45 minutes, the Manx side went further ahead just seven minutes into the second period.

A pacey corner from Adam Mealin was met by the head of Murray who rose highest and nodded low into the net from close range.

St Martins then had their goalkeeper, Taylor, to thank in the next few minutes who provided a series of good saves to deny the hosts more goals.

But FC IOM made it 5-0 on 64 minutes when a delicious McVey cross in behind the St Martins defence found substitute, Furo Davies, who calmly took the ball down in the area before chipping a composed finish past the advancing Taylor.

The visitors did have the ball in the FC IOM net moments after the restart, but Robert Weir’s calm finish from point blank range was ruled out after it was judged the ball had gone out of play on the right before reaching him.

Then seconds after that, the Ravens punished the Shropshire club again when a blistering counter-attack from a St Martins corner saw Simpson sprint down the left towards the byline before slotting across again for Doyle to slide in his second and the Ravens sixth goal from just a few yards out.

Just 180 seconds or so later, Doyle then secured his hat-trick when he powered home a low header following some smart footwork and a crisp cross from Mealin on the right flank to make it 7-0.

With the goals now flowing for the home side, they got an eighth on 76 minutes as Davies got his second of the night with Simpson the provider again, charging to the left byline before cutting back for Davies to slot into an empty net from 12 yards.

Despite a valiant and committed display throughout the game from St Martins, their night then got even more difficult when defender, Owen Robinson, received a straight red card for denying a clear goalscoring opportunity by dragging down Doyle on the edge of the penalty area with eight minutes left.

The icing on the cake for FC IOM came in the 92nd minute when man of the match, McVey, having commanded the game from midfield made it 9-0, curling a well-placed free kick from 20 yards into Troy Taylor’s bottom right corner.

At the full-time whistle, the FC IOM players and supporters applauded their opponents, St Martins, off the pitch as a mark of respect for the visitors continued commitment in the face of huge adversity throughout a difficult season.

FC Isle of Man's Assistant Manager, Lee Dixon, was unhappy with his side's first half performance but thought things improved in the second period:

The victory means FC Isle of Man maintain second place in the league standings, two points ahead of both Abbey Hey and Wythenshawe Amateurs.

The Ravens next league game is against Stockport Town at The Bowl next Saturday (26 March) at 6.30pm

Man of the Match: Jack McVey (FC Isle of Man)