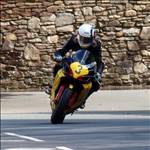 The winner of today's blue riband Senior Race in the Manx Grand Prix has played down his victory.

Michael Russell won the four lap event by over a minute, taking the lead on the final lap after Ryan McCay, who had been in front from the start, came off his machine at the Mountain Box.

McCay was airlifted to Noble's hospital where his condition was not thought to be life threatening.

Speaking to Chris Kinley after the race, Russell paid tribute to his rival (play audio file):

Carolynn Sells and Dan Sayle took the honours in this morning's Lightweight and Ultra-Lightweight races.