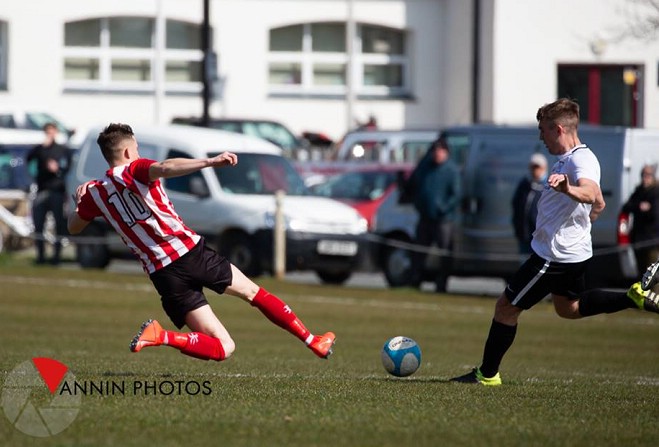 A sensational 90 minutes saw the pair share eight goals, with Malew battling back from 4-2 down to force an additional half an hour.

Matthew Aire had scored twice and assisted one as the hosts looked on course for a regulation victory at Springfield Road, but Malew refused to accept defeat.

Josh Clarke gave the southerners hope before an unfortunate Lee Ford own goal saw the match finish level at 4-4.

A second booking for Kieran Krypner meant the visitors had to play on with 10-men, but the Canada Life Premier League side couldn't make the numerical advantage count.

No more goals in extra-time meant the match went to penalties, and the drama was not done there.

Controversy struck as the spot-kicks entered sudden death, with Malew goalkeeper Dean Kinley adjudged to have moved off his line whilst denying Drew Ward, prompting the referee to issue the stopper's second caution of the match.

Ward converted at the second attempt, before Michael Pardoe blasted over from 12-yards meaning Douglas Athletic went through.

Another Premier League team who were pushed all the way by lower-division opponents were Marown, as they required a Matty Davies effort in the 117th minute to see off Ramsey Youth Centre.

A Dean France goal was the difference between Ayre and Old Boys as the Blackberry Lane outfit booked their place in the last-eight.

Elsewhere, Foxdale claimed their second top flight scalp of this season's Keystone Law Hospital Cup as Jay Chatwood and Andy Williamson strikes ensured they went through at the expense of relegation-threatened St Johns.

St Georges eased through with four goals in each half to thrash Governors Athletic 8-0, and Peel avenged a midweek defeat to Corinthians by overcoming the Whites 3-0 at Douglas Road.

Ramsey scored five second half goals as they romped to an 8-2 win over Onchan.