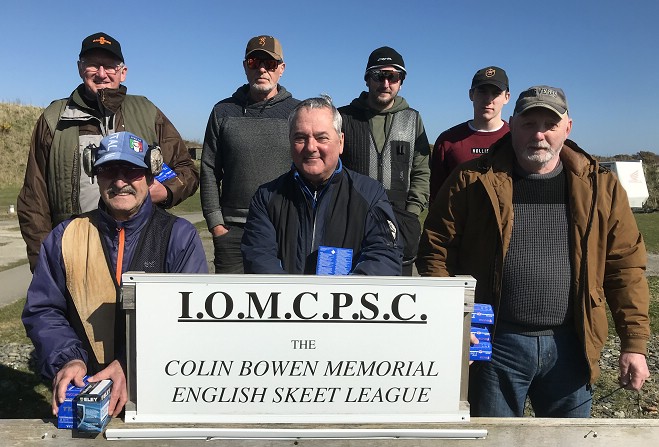 The first round of the Colin Bowen Memorial English skeet league for 2022 was held at Meary Veg Santon with nineteen competitors taking part in dry sunny but breezy conditions.

The joint leaders after the first round were Paul Mihailovits and Michael Cross with perfect 25 straights,in equal third place were Will Rand and Giulio Fabrizio on 24 with Peter Kelly, Stan Cross and John Moore next on 23. The leading B class shooter was newly promoted Steven Rand on 20 with Peter Fabrizio next on 19. The leading C class shooter was Brian Kelly on 21 with Wayne Barsby and Rob Marshall in equal second place on 16.

29 but one point ahead on 30 in second place was Mark Sweetman but taking C class by eight points was Brian Kelly.

In B class Madeleine Simpson was in third place on 35 with Peter Fabrizio taking second place on 39 ,but winning B class with 41 points was Steven Rand .

It was all square in A class with Paul Mihailovits, Michael Cross and Will Rand all tying on 49 points for first place with Giulio Fabrizio in forth place on 48 and Stan Cross fifth on 47 and making the top six was Peter Kelly on 45.

Seven shooters carried on to complete a 100 targets with Paul Mihailovits taking the honours on 93 with Dave Corlett second on 86 and Jeff Corkill third on 82.