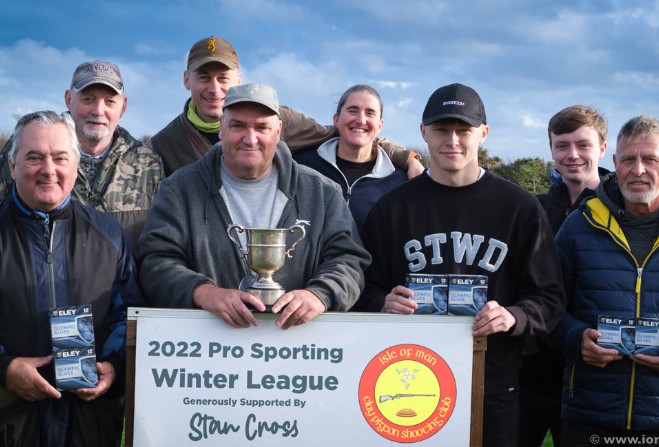 The first round of the 2022 Winter Pro Sporting League was held at Meary Veg, Santon, across 50 targets in windy and at times moist conditions. The event was generously supported by Stan Cross, with the Referees and Safety Officers Cup also up for grabs.

Six competitors made a strong start on a challenging first layout by hitting all five available single targets, but it was a different story during the on-report pairs, with just Paul Mihailovits and junior David Cowin bagging perfect tens. The instant pairs proved harder still, with Mihailovits dropping one target to finish on 24 followed by Rob Watterson on 20. Neck and neck with 19 points each were Stan Cross and juniors Joe Faragher and David Cowin.

Layout number two proved less of a challenge initially, with 11 of 19 competitors scoring full marks during the opening segment of five single targets, but those targets became significantly more difficult when shot as on-report pairs, leaving Will Rand alone on top with nine points from a possible ten. The final segment of five instant pairs was trickier still, but choosing the correct target to pick off first pays dividends, with Rob Watterson, Alan Brew, and David Cowin dropping just one point each. The second layout leaders were Watterson and Rand with 22 points, followed by Mihailovits on 19.

Blustery showers failed to dampen spirits thanks to our new shelters, getting this year’s winter season safely underway in comfort and style. League leaders after 50 targets were Paul Mihailovits on 43, followed by David Cowin, Stan Cross and Joe Faragher all on 38.