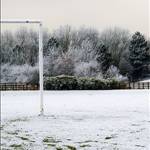 Sport is officially a white out!

All of this weekend's Football, Rugby and Hockey fixtures have been postponed.

The decision by the Isle of Man Football Association is due to frozen pitches and difficult driving conditions.

The Manx Hockey Association has been told that all Manx Sport and Recreation pitches and the surface at King William's College will remain closed until Monday morning at the earliest.

In Rugby, the South Lancashire and Cheshire Division Two match between Douglas and Ashton on Mersey was called off yesterday with the ground at Port-e-Chee under snow and ice.

Ramsey's trip to Holmes Chapel and Vagabonds away game at Dukinfield were to be switched to Southport, as the home teams grounds are unplayable.

But so too is Southport with the playing surface frozen solid.

All three Manx Shield Games have been called off.

All this weekend's Outdoor Winter Bowling League matches have been abandoned.

And the Duke Karting at Jurby is postponed.

Peel under-13 training at QE2 astro

There is some sport going ahead. A large party from Manx Harriers will contest the Lancashire Cross Country Championships at Witton Park in Blackburn on Saturday. The venue was inspected on Thursday and declared fit.

Saturday's training day with David and Juan Knight at Ballagarraghyn is definately on.

And Sunday's Winter Race Walking League at Ronaldsway Industrial Estate has signing-on at the Pavilion at 9.30am for a 10am start.