Squash: AON on top in Division A 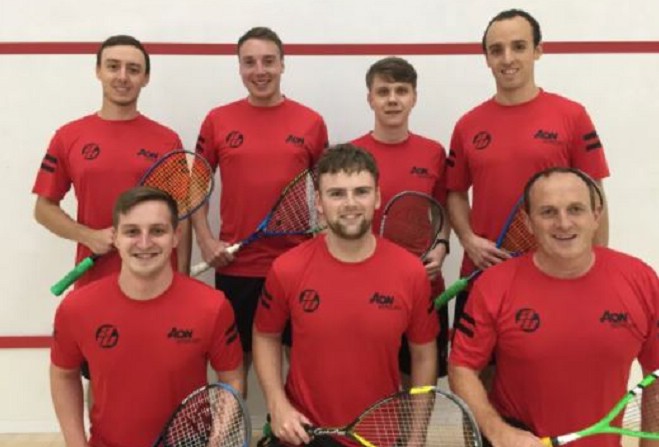 Team AON claimed the Division A title as they won the final match of their league fixtures prior to the Christmas break overcoming StoneArt 4-1. All but one of the four matches finished 3-1 with AON’s Jason Crease, Mason McLarney and Chris Cave ensuring their team got the win. StoneArts captain Steve Baker prevented the clean sweep by beating Liam Davies. The final match to be played was between AON captain Robin Crease and Hamish Thornton where Crease took the match in straight games. Team AON are a young competitive side who learnt their squash here on Island and are very worthy champions.

Since the Crazies re-branded themselves as ‘Crazy Phil Shaw Vehicles’ they have been really driven, not losing a match. This week they made it three wins on the trot with victory against Argosy Allstars. James Ramsey won 3-0 whereas his team mates Mark Webster Smith, Mike Hayler and Dave Freer all dropped games as they motored their way to victory. Dave Freer had a particularly close match with Sharks teammate Dave O'Neill. Argosy number one Dave Norman showed why he occupies the top spot in the IOMSRA Rankings by defeating third placed Ashley Sandyford Sykes.

Sharks remained Outcasts nearest challengers at the top of the B League after they scored a maximum points win over Racketeers Pioneers in the pair’s final game of the year. All five matches ended in 3-1 successes for Dave Freer’s side as they swept to a 250/176 victory. Joining skipper Freer in the winners’ enclosure for Sharks were Douglas Jacobsson, Alan Macnair, Dave O'Neill and Greg Ansara, the latter beating Barry Irvine on his return from injury.
Argosy Junior Academy made it 5 wins out of 10 matches when they defeated Crowe Dragons in the final match before the Christmas break. This young team are very worthy of a place in Division B and Oliver Wait, Isaac Quayle and Ben Leith ensured their team got the 25 bonus points with good wins over their respective opponents. Crowe Dragons wins came through Julien Uzzell and Stephen Pitts, with Pitts, the November Player of the Month, triumphing in a cracking five game match with Emma Leith.

The Division B champions were determined in this final round of fixtures which brought together league leaders Outcasts and Island Tyres and Exhausts. This was a close tie with three of the matches finishing 3-2 and the other two 3-1 in games. All the wins went to the Outcasts players though and the team of Angus Hopkinson, Chris Cave, Liam Davies, Mark Henson and captain Peter Ginty won the match 250-201 in points ensuring that they could claim the B League trophy.

The Pre-Christmas Division C Title was decided when the top two teams battled it out this week, with Island Exhaust Vets just managing to hold on to their unbeaten record in a close 3-2 encounter against Outcasts Dragons. Gerrit Du Toit and Ian Sheard both won in straight games for Vets while team-mate Peter Sharples had to work much harder for his win in a ding-dong battle against Phil Whittam that went all the way to five games. Wins for Dragons came from Andy McLarney who beat Les Callow 3-1 and Darren Smethurst who triumphed over Mark Stratford at one, coping well with Stratford’s usual winning formula of playing the corners with high lob shots. Island Exhausts Vets finished this half of the season with a score of 2172, over 200 points clear of their nearest rivals.

Buchanan & Pitts Misfits recent poor run of results continued against Santander Academy Racketeers as they somehow conjured a loss out of a possible win having looked the favourites for much of the tie. It was close though, ending 221-196 on points before Santander claimed the 25 bonus points. Alan Walkinshaw got off to a very good start against Martin Greenwood but was then pegged back to lose 3-2 while Elliot Henson likewise lead 2-0 against Steven Wright only for Wright to come back fighting to steal the match 3-2. John Watterson became the third Dragon to lose in five games, this time against Charlie Beard. Andy Dixon got the home side its only victory on the night in a five game battle against Harry Douthwaite. Finally, Stephen Pitts, playing at the dizzy heights of number one, went down 1-3 against Fraser Dorling to seal Santander’s victory.

The Falcons finished their fixtures with a 3-2 win over Chrystals Junior Academy. Sarah Simpson and Simon Jones both had good 3-0 wins against Harrison Callow and Callum Larkin respectively. However the match score was equalised when Island ladies players Beth Jones and Amaline Batty beat Vicky Watterson and Phil Butler, the latter in a tight high-scoring match. The overall match was decided at number one where Julien Uzzell defeated Emma Leith 3-2 to claim the win and the 25 bonus points for Falcons.