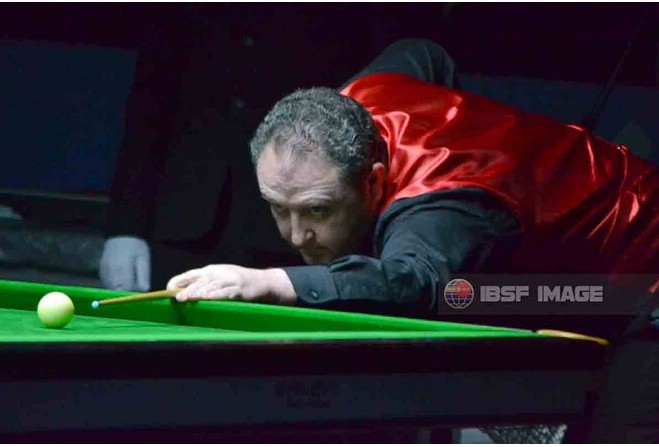 Finch Hill ‘Mob’ look comfortable at the summit of the 2018/19 Macs Builders Merchants snooker league, with another strong victory after week 16 of play.

But St Olaves were the big winners of the week, recording a home whitewash against Douglas Snooker Club ‘Wannabes’.

There were breaks of 47 for Sean Corkish, 27 for Dan Crawley and 21 for James Kerr as the high-flying trio won their frames, following an opening pair of victories for Paul Smyth and Benito Mongiovi.

The ‘Mob’ also won big though, with a 4-1 victory at home to Port St Mary Legion.

Tom Miller started strong with breaks of 35 and 22 against Dave Pickersgill, with other wins coming from Peter Kirkham, Steve Finnegan and Steve Oates.

But Peter Crellin couldn’t quite complete a win-to-nil, as he was beaten by Terry Boyle in the final frame.

Shaun Roberts also had a break of 22 for Port St Mary, but it wasn’t enough to catch Finnegan.

More breaks were flooding in at Douglas Snooker Club as the ‘Hurricanes’ defeated the ‘Newbys’ – Nigel Kermode had a 20 and Chris Dagnall a 40 as the home side went 2-0 up, before Chris Murphy made it three.

Pat Maher got one back for the ‘Newbys’, and Zain Abideen thought he’d made it 3-2 with a frame win over Paul Smith, but he was later docked the frame after the discovery that he had played off the wrong handicap.

Jamie Wilson had a break of 22 for the ‘Newbys’, but he was beaten by Dagnall.

In Ballasalla, Malew 2 were beaten 3-2 by Finch Hill ‘Musicians’ – Peter Glover, James Hynes and Lee Hunt won for the guests, with home wins for Alec Oates and Mark Quinn.

Oates had a break of 20, and there were also breaks of 22 and 21 for Tony Pring and John Kennish, neither of which were enough to seal a frame win.

In the west, Peel Legion won 3-2 against Malew 1 thanks to Geoff Hall, Kyle Darby and John Kelly – Kelly with a 25 along the way.

Tony Cubbon and Roy Gelling won for Malew, with Cubbon compiling 106 points against Don Humphries with breaks of 24 and 21.

Finally, back at Finch Hill, the ‘Young Guns’ were beaten 3-2 by the ‘Rockets’, with wins for Matt Radley, Marek Kenny and Ron Grogan putting the ‘Rockets’ three up.

But Brendan Clague and Nick Stephens anchored well for the ‘Young Guns’, saving valuable points as they look to keep pace with the leaders.