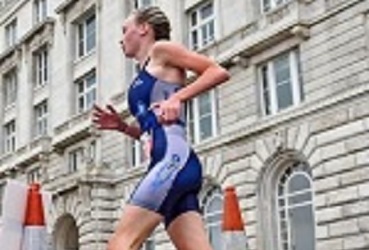 She may have been deemed too young to be selected for this summer’s NatWest Island Games but 16 year-old Rebecca Storrie showed her undoubted talent to win the Microgaming Triathlon Festival.

Organised by the Manx Tri Club, she won the women’s race, completing the course in an impressive time of one hour and six minutes, nearly two minutes clear of runner-up Hannah Howitt.

Hannah headed out of the pool with a very strong swim but was closely followed and then overhauled by Becky on the bike course, a lead she never relinquished.

Lynsey Elliott was in a fine third place.

The men’s race saw some fierce competition with Andy Nash and Joseph Ricciardi tying for joint first in a super fast time of 58 minutes 50 seconds, closely followed by Antony Bell-Scott in third.

More than 100 competitors took part in the event, completing a 750 metre swim, a 20km cycle route and a 5km run around the Mooragh Park in Ramsey.

There was also a shortened swim category where the competitors covered 400 metres - Roger Davies and Kelly Shimmin the respective winners.

A total of 186 competitors in 62 teams lined up to cover the same course for the team event on Sunday.

Three of the teams and six individuals, with the support of Equiom, also raised around £14,000 for Hospice and the Manx Breast Cancer Support Group.

The Manx Viking Wheelers rider stormed around the course in 52.42 from Mark Harrison and Daniel Curtis.