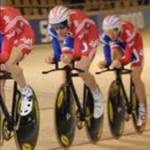 The Isle of Man has three representatives in the Team GB cycling squad which will compete at the London Olympics.

Manxmen Mark Cavendish and Peter Kennaugh, along with Onchan resident Ben Swift, have all been named in the squad this lunchtime.

Cavendish and Swift are in the pool of riders for the men's road race.

Kennaugh, who recently won gold in the team pursuit at the UCI Track World Championships, is in the endurance squad for the track events.