Tributes being paid to Luis Carreira 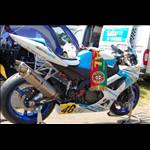 Tributes are being paid to T.T. regular Luis Carreira who died following a crash in qualifying for the Macau Grand Prix.

The 35 year-old portuguese rider came off at Fisherman's Bend and was taken to hospital by helicopter.

The session was red-flagged and subsequently abandoned.

Social media has been packed with tributes to the popular competitor.

"RIP Luis Carreira" - the simple tweet from 19-time T.T. winner John McGuinness who is competing out in Macau.

Others out in the far east paying tribute include Simon Andrews and Conor Cummins.

North One television commentator James Whitham says "A sad loss to any paddock . . . A talented rider but more than that a genuinely nice bloke ! Gods speed Luis!"

And T.T. and Motorsport Development Manager Paul Phillips tweets "Such sad news about Luis. Just gutted. One of the nicest men I have ever met in motorcycling. A real gentleman and a very talented rider."