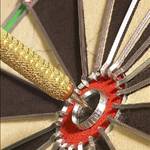 In the men's singles he overcame doubles partner Rob Corrin in the semi-final and then beat Island number two Wayne Harrison in the final to take the title.

In the men's doubles Tyrer and Corrin defeated Paul Sertin and Robbie Cannell in a close battle.

To complete Tyrer's successful weekend he and Lorna Tyrer took the mixed doubles title from Shauna McDaid and Paul Palmer.

In the ladies' singles Island number one Wendy Andrews beat Lorna Tyrer, while the ladies' doubles was won by Jackie Sayle and Nikki O'Connor, with Shauna McDaid and Caroline Hynan finishing runners-up.

Thomas Sertin proved he is still the one to beat at youth level.

He defeated Dan Marran to win the youth title and retain the number one ranking.

The next event in the IOMDO darts calander is the start of the new ranking season on Saturday, November 21st, also at the Hop Garden.

The Committee are thanking all those who have taken part in this season's ranking events and wish the following players who have qualified for the Celtic Cup taking place on November 28th and 29th in Cardiff.