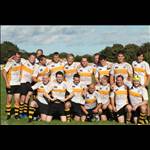 Ramsey aim to keep their unbeaten home record intact in South Lancashire / Cheshire Division Two on Saturday when Marple make their first visit to the jewel of the north.

The Stockport-based outfit have visited the Island several times to play Douglas over the years and are no strangers to Manx shores but have never ventured further north.

Ramsey were a little disappointed to come home with nothing from their trip to Moore last Saturday.

They were pressing for the equalising score in the closing stages of the game and a late Moore breakaway denied them the draw and a losing bonus point.

Amends will need to be made this week and Marple could well provide them with win number two.

Marple won their opening two matches against Southport and Sefton but have since lost two on the bounce against Ruskin Park and Orrell and could well struggle with the rigours of travel.

Ramsey second rower Max Singer picked up a bruised kidney last weekend and he will be doubtful for this game with Glyn Hooson-Owen waiting to deputise.

Aside from that there are no other injury concerns from the Northern camp who could welcome back wing Adam Yates who has yet to make a start this season.

With the possibility of good weather and home advantage, Ramsey will fancy a win.

The eye-catching game in the Shimmin Wilson Manx Shield this weekend is undoubtedly at Glencrutchery Road where Vagabonds B host Douglas B.

Vagas are tied at the top of the standings with Southern Nomads and are two-from-two so far this season.

Douglas by contrast, wobbled in week one and lost away at Castletown.

They bounced back however with a solid performance to beat Ramsey B a week later.

There were some familiar names on that Douglas scoresheet too

Ben Dutnall and Martin Higgins were both over the whitewash proving that there still is life in old dogs and they will be a handful for Vagas on the day.

Much of course will depend on first team call-ups.

At King William's College, Ramsey B will meet Southern Nomads.

The Southerners are the defending champions and are unbeaten in their two outings.

A narrow 22-17 win over Castletown last Saturday suggests that they are far from their Shield-winning best and could well be feeling the loss of Messrs Hammal, Cubbon and McCulloch, who defected to Vagabonds during the summer.

Ramsey by contrast are still finding their feet under new skipper Will Wren and are capable of pulling off a surprise.

There will also be a notable rugby landmark for Ramsey B with father and son Tommy and Jarred Callister set to take the field together for the first time.

Just across the way at Poulsom Park, Emerging Nomads take on a much-improved Castletown, with the formbook here suggesting a Town win.

I watched them in week one and they were impressive.

There was structure and organisation at the base of the rucks and pace outside when it was needed.

If there is a weak link it could be in the front row where Town are a little thin following a spate of injuries. If they can overcome that though, they should take the points.