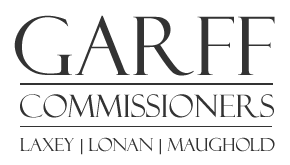 Election details: The polling station was at Baldine Methodist Hall for Lonan Ward, and the Laxey Working Men's Institute. The count for both wards was be held at the institute. Peter Burgess was the returning officer.

Refuse rate in each ward; £161 fixed charge per household

Seats available: 3 in each ward

The Authority: Garff Parish Commissioners is responsible for a range of services, including being part of the shared Eastern Civic Amenity site board.