On Air Early Breakfast Chris Williams | 5:00am - 7:30am
Van Morrison - Jackie Wilson Said (I'm In Heaven When You Smile) Download 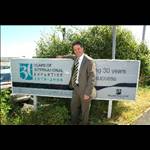 Castletown based life company Friends Provident International Limited is this year celebrating 30 years in the Isle of Man.

Since starting out in 1978, the company has operated under four different names, has occupied six offices - all in the south of the Island - and has provided investment solutions for over 100,000 policyholders worldwide.

FPIL has seen changes in tax rules, changes in parent groups, the development from hanging files to the internet revolution and the launches of products, funds and successful relationships. It has also seen the Isle of Man rise to the status of a premier financial centre, as well as a range of global shifts, crises and triumphs.

In a media release to mark its 30th anniversary the company says that throughout each year and each event it has not only endured, but advanced. And FPIL acknowledges that this success is due in no small measure to the Island and local people who have helped it grow from strength to strength.

Director and General Manager Jonathan Hall says: 'At this significant milestone the company is keen to show its huge appreciation to the Isle of Man and to the southern community in particular, as its home for three decades. It also wants to acknowledge the remarkable people who have worked for it in that time, some of whom have served for more than 20 years, and give FPIL a unique edge in a market where experience is so valuable.'

In celebration of the anniversary, FPIL is holding a staff family fun day followed by an evening event on July 19.

The company has also taken prime advertising positions on the entrance road to the Isle of Man Airport (pictured) to communicate its dedication to the Island and to working as part of the local community.

Jonathan Hall continues: 'I want to send out a clear message that FPIL is proud of its Manx roots, of the work it's done, of the people it has employed and the relationship it has forged with the local community through projects and initiatives over the decades. FPIL is serious about its commitment to this Island, now and in the future.'