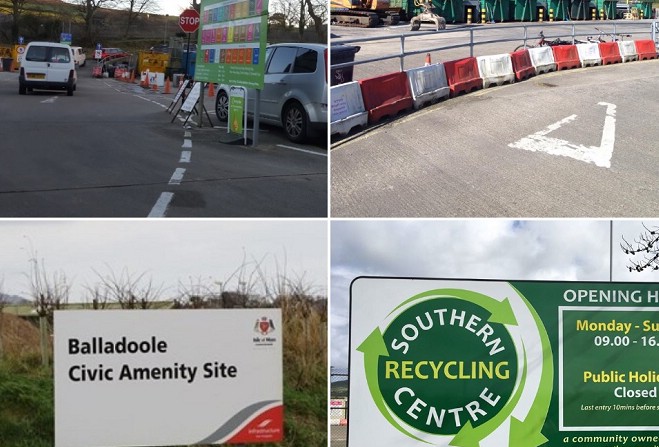 The Island's four civic amenity sites, which are run by local authorities.

The Island's civic amenity sites were inundated last week when normal service was resumed, as people turned out to dispose of waste collected during the lockdown.

The majority of the waste collected was grass cuttings and other garden waste, thought to be a product of the lockdown and the prolonged period of dry weather.

Site managers have been tasked with dealing with high volumes of material, easing the flow of traffic, and maintaining social distancing to keep users and staff safe.

Limits have been imposed on the type of waste which can be left, as well as on the number of cars allowed on each site.

Most sites are only taking household and green waste at present, though the Department of Infrastructure has started emptying Bring Banks again, allowing those who've stored recycling in recent months to get rid of it.

A one way system implemented on Castletown Road, on the approach to the Southern Civic Amenity site, has been visited more than 150 times each day this weekend.

The Northern Civic Amenity site at Balladoole is running a 'booking system' to manage queues.

Manager at the Western amenity site Mike Rose explained to Local Democracy Reporter Ewan Gawne how his staff are dealing with the backlog of waste:

Ewan also spoke to the chair of the Eastern Civic Amenity site board, Nigel Dobson: