On Air George Ferguson In for Alex | 3:00pm - 5:30pm
Elvis Presley, Royal Philharmonic Orchestra - I've Got A Thing About You Baby Download

Ballasalla residents 'not being listened to' over Post Office future 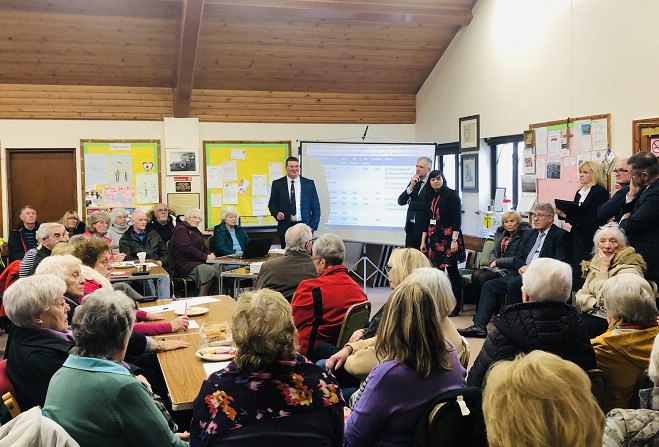 The views of Ballasalla and area residents are not being listened to in the row over the potential closure of the sub post office.

That's according to Arbory, Castletown and Malew MHK Graham Cregeen.

The village hall has been packed for two meetings in the past fortnight with political and board members from the Post Office facing questions from the floor.

Mr Cregeen says many constituents feel a decision has already made and he highlights the lack of advertising for a new sub post master:

His constituency colleague, Jason Moorhouse, argues efforts have been made to consult with the public in the village, but he's concerned it could be too little, too late:

You can watch Mr Moorhouse's full interview with Manx Radio's Dollin Mercer below:

However, the chair of Isle of Man Post Office says the decision not to re-advertise sub-postmasters' roles after a retirement or resignation is 'nothing new'.

Julie Edge has come under fire from fellow MHKs and members of the public, after the future of the Ballasalla branch appeared to be uncertain.

Ms Edge will face a number of questions on the topic in today's sitting of Tynwald - many of which are from Mr Moorhouse.

But, she says no concrete decision has been made yet:

You can watch Ms Edge's full interview with Manx Radio's John Moss below:

Meanwhile, a protest about the potential closure of Ballasalla's post office counter is due to be held this morning.

Organisers plan to be outside Tynwald on Prospect Hill in Douglas, ahead of the start of the court's January sitting.

Anyone who wants to attend is asked to be there for 9.30am.