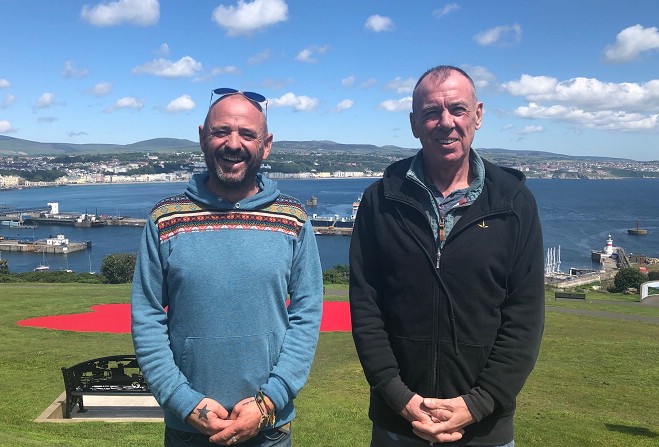 Politicians need to 'grow some' and recognise the opportunity 'Manxifying' cannabis legislation presents to the Island, according to a consultant on the drug.

Jeff Ditchfield, who has been appointed as special advisor to the newly formed Manx Medicinal Cannabis and Hemp Association, says he is 'very encouraged' by the results of government's recent survey.

This week, the Department of Health and Social Care revealed 95% of the 3285 respondents backed the cultivation and processing of the crop on Island for medical purposes.

Mr Ditchfield now believes the next step is for the public to give their MHKs the confidence to believe in law reform for the Isle of Man.

Health Minister David Ashford says the findings from the consultation will be presented as recommendations to go before the Council of Ministers in due course.

He says if the Island is going go ahead with changes, 'we've got to do it right'.

"People shouldn't expect that it's going to happen overnight because there's going to have to be regulation in place.

"Also, if we do go down this line, expand medical cannabis use and prescribe it at GP level, it's very, very important we bring the GPs along with us."

Next month, the self-styled cannabis consultant Mr Ditchfield will be hosting a meeting for GPs to allow those within the community to learn more about the properties of the plant.

He is aiming to play a role in a training programme that gives Manx doctors the knowledge and confidence to prescribe medicinal cannabis.

It supports the view of Professor Mike Barnes who visited the Island earlier in the year and told Manx Radio that health professionals are 'ignorant' of the potential benefits of the drug.

Professor Barnes has since opened private clinics in Manchester and, within the current law in the UK, started issuing prescriptions for an ounce of cannabis 'bud', for medical use - but at a cost of £900.

"A lot of people can't afford that" says Mr Ditchfield. "They have to resort to the black market and what we'd like to see here on the Isle of Man is to make it cost effective.

"Let's give people the knowledge they need, let's give them access to different strains of cannabis but at a cost that is not extortionate."

The new MMCHA is comprised of members from the Department of Enterprise and the Manx Biomed Cluster, with the objective of ensuring the development and delivery of 'a safe, unique, internationally respected hemp and medical cannabis framework.'

It is hoped the creation of the group will act as a catalyst for an island based cannabis industry that exports high value hemp and GMP grade medical products globally.

Such an operation, it says, will require the development of a supporting ecosystem fit for purpose to include investment in 'high quality laboratory facilities' and 'skilled and qualified personnel'.

"The ministers who can bring in these new changes haven't got that knowledge; we have, and that's what we're going to try and give them" says the group's new special advisor, Jeff Ditchfield.

"We're coming up with some draft proposals and legislation that will fulfil the wishes of the people who've responded to the online consultation.

Bob Comish meanwhile, who says he's been 'fighting' for the licensing of industrial hemp for the last year and a half,' has gone from being a grass roots activist for hemp to now sitting on a steering committee within the Department for Enterprise and an acting director of the MMCHA.

Of the 1,012 respondents, 97% supported the growing and cultivation of the crop on the Island, favouring a regulatory framework similar to the UK.

He believes that response is "overwhelming,"

"To see that response come from the public and for them to see the quality of this crop for what it is and what we can do with it.

We're in a situation now with plastic throughout the world. You can make hemp plastic and it's biodegradable."

According to its founders, the MMCHA is an all-inclusive and independent group, despite having input from DfE.

"We're not under the control of anyone" affirms Mr Ditchfield. "We're inviting members to join us and hopefully we'll become a voice that can tell Tynwald what we want and how the system should operate."

The group can be contacted via email at info@mmcha.im.