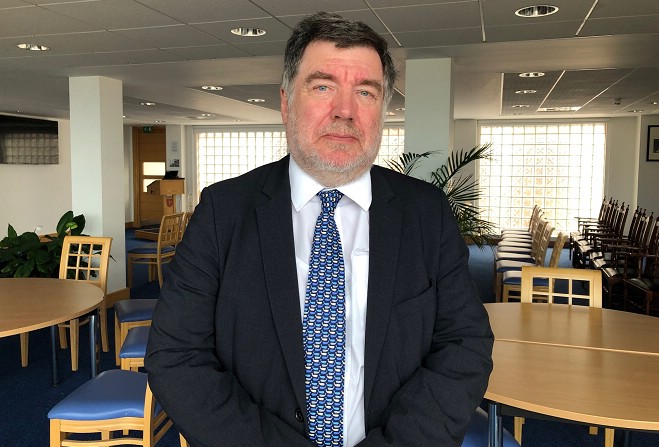 Professor Mike Barnes wrote the report on the efficacy of cannabis for the UK All Party Parliamentary Group for Drug Reform in 2016.

Man who consulted on Alfie Dingley's case, saddened by lack of NHS prescriptions

Getting doctors to prescribe medicinal cannabis is a problem, according to one UK medical expert.

Honorary Professor of Neurogoloy at the University of Newcastle Mike Barnes, says education is needed in the field, if the profession is to make use of the country's 'liberal laws'.

Professor Barnes, who addressed Tynwald members yesterday (26 Mar), told the Island's politicians that around 80% of doctors are for the medinical use of the drug 'in theory'.

However in practice he says, they won't prescribe it because they simply aren't confident enough.

"The law in the UK is really quite liberal. Any specialist doctor can prescribe [cannabis] for any condition, which is probably the most liberal in europe.

"The problem is getting the doctors to prescribe.

"For some it's a morality question, they just don't agree with cannabis being legal and just won't prescribe it but actually, that's quite unusual."

Thanks to @allinson_alex and @Mikebarnes29 for speaking to @tynwaldlive #iom members this lunchtime - brilliant to hear from the #UK leading authority on #MedicalCannabis. Very informative and thought provoking.

He estimates that some 2 million people are using cannabis illegally for medical purposes daily in the UK, though since the Home Secretary Sajid Javid had the drug rescheduled in November last year, Professor Barnes is disappointed with what has followed.

"Sadly, despite the legalisation in the UK, there hasn't been a single NHS prescription which has been written.

To the best of my knowledge, there's been 10 in the private sector. Which is good in some ways but bad in others because that means only at the moment it is accessible to those that can afford private prescription."

Professor Barnes, who was instrumental in securing a licence for the family of Alfie Dingley - a young boy who suffers from epilepsy - praised the campaigns of last year, which led to the UK legalisation in specialist cases.

"Families with epileptic children are incredibly knowledgeable about cannabis and do know a lot more than the doctors.

I think from the doctors point of view, many should embrace that and learn from that."

"There are some sadly, that are rather antagonistic to patients coming in telling them what to prescribe and how to prescribe it.

But we're in an ironic situation, where many members of the public know more than the doctors."

"For the last 50 + years, we've had cannabis portrayed to us as bad, anti establishment, no good for anything, of no medicinal use, but now all of a sudden, doctors brought up in that tradition have been told 'well actually, for certain conditions it is quite useful.'"

Dr Alex Allinson, who invited Professor Barnes to present to Tynwald members, has touted the Isle of Man as the perfect place to conduct research into the individual cases, should medicinal cannabis be made available.

"We're dealing with a drug that's been around for thousands of years" he told Manx Radio, "but we've known about the scientific basis of the way it acts over the last couple of decades.

"So what I'm very keen on doing, if we can on the Isle of Man, is to allow people to use cannabis for medicinal purposes, but actually do some of the observational studies which are necessary to make sure it works for them."

While the UK government introduced a change to the law, Professor Barnes notes that there hasn't been a new health education program for doctors.

In response to this, he set up an academy for medical cannabis which offers 12, free, 20 minute modules.

This teaches doctors and health professionals he says, 'roughly the basics' of cannabis medicine as well as the when and how to prescribe.

"I'd like to see more of those in different formats; day seminars, week-long seminars, more detailed courses.

From an Isle of Man point of view, he would like to this kind of work take place with the Department of Health and Social Care through the likes of himself to establish an accredited cannabis program for GPs on Island, which doctors can enroll on before they prescribe.

Listen below to the full Mandate report: